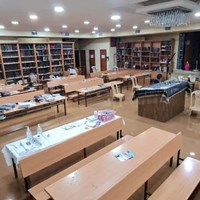 The worshipers of the Cleveland Beit Midrash in Raanana were sorry to find out tonight that the Beit Midrash, which has been their spiritual home all year round, was flooded with rainwater and damaged. • View documentation from the site

The heavy rains that fell heroically throughout the day caused a lot of property damage. One of the victims is the beit midrash of the Rebbe of Cleveland located on Mount Sinai Street in Raanana.

In the documents obtained by Behadrei Haredim, the beit midrash appears to be flooded with rainwater, which caused extensive damage to the synagogue’s property, which was recently renovated to its name and glory.

The Raanana Municipality and its head, Haim Broida, arrived at the scene and called a team of volunteers and municipal employees to drain the water using special pumps. The staff has been working at the site for more than two hours to deal with the heavy damage caused to the synagogue.

A house in the synagogue was used by the late Rebbe of Divrei Yissachar from Cleveland, who soaked up the wilderness in the city for over 45 years and united under it all the variety of kippah wearers in Raanana and those who did not. Quite a few of its residents who took refuge in its shadow have strengthened and returned in complete repentance and now run a kosher Jewish home in Israel.

The Gabay of the synagogue turns to the public for help in financing the expenses of the restoration of the synagogue, which is a magnet for the people of Beit Yisrael from all denominations and circles.

You can help through ‘Communities’ booths: