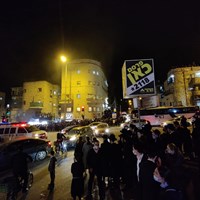 The Jerusalem Magistrate’s Court ruled that the police must compensate an ultra-Orthodox resident of Beit Shemesh and a witness on his behalf in the total amount of NIS 24,000; This follows a series of allegations of negligence and injustice on the part of the police, who arrested the ultra-Orthodox and held him in illegal detention.

However, during his arrest, the police committed a series of injustices against him, following which he decided to sue the police, through his lawyer Itamar Ben Gvir. First, the prosecutor claimed that instead of arresting him in the morning, the police could have called for an investigation. In addition, the conditions of detention in which he was held were contrary to the Detention Act.

According to him, there was no bed, mattress or blanket in the detention cell, nor soap and toilet paper, and in addition he was not provided with kosher food in the court. And if that was not enough, several hours after his arrest, the police decided to conduct a humiliating search on his body.

But the “most disturbing point” in the plaintiff’s case, according to Judge Keren Miller’s ruling, concerns the conduct of the police after the plaintiff was due to be released from custody. In a hearing that took place in his case after his arrest in court, the court ordered his release on conditions, including the signing of a self-guarantee, a third-party guarantee and a monetary deposit.

The person who fulfilled the conditions for the release of the plaintiff is Y., a public activist in the ultra-Orthodox community at that time. Immediately after the hearing in which the court ordered the release of the plaintiff, Y. came up to arrange the deposit with the court secretariat. But later, when he approached the police station in the Russian compound to sign a bail, the station refused to allow him to sign on the grounds that it was only possible to sign at the police station in Beit Shemesh.

Even after he returned there was still no investigator at the station who could sign him for the required bail and he was forced to go and return again. When he returned to the station around 4:00, he was finally signed only around 5:00 in the morning. After this tract of things the plaintiff was released only around 6:00 a.m., almost a day after the court ordered his release.

After filing the lawsuit, the plaintiff requested that Y. testify before the court about what was done. However, when the evidentiary phase of the trial took place, Y. lived in England, and the trial took place in the middle of the Corona period. Therefore, the plaintiff requested that Y. testify by virtual means, such as in Zoom, but the prosecution objected and demanded that he physically appear for the hearing.

Following the prosecution’s opposition, Y. was forced to fly to Israel, undergo negative corona tests, and even go into 10-day solitary confinement on his return to England – all at a cost of thousands of shekels.

The prosecutor’s attorney, Adv. Itamar Ben Gvir, said: “I am happy with the court’s decision, which is once again sending the police, for the umpteenth time, a clear message: The ultra-Orthodox also have rights in the State of Israel. The unbearable ease with which the police deny religious and ultra-Orthodox detainees such basic rights should keep sleep out of the eyes of every law-abiding citizen in the State of Israel. “

Ben Gvir added that “for this reason I am coming to the next Knesset – to change from the root the discriminatory attitude of the police and the law enforcement system against the ultra-Orthodox.”