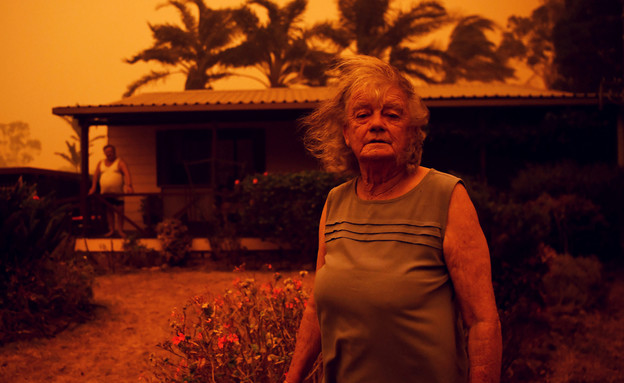 Is smoke billowing over South Australia responsible for pink sunsets in South America? In an article published today in the scientific journal Science, Prof. Ilan Koren and Dr. Eitan Hirsch reveal that millions of tons of smoke particles from Australia’s largest fire wave swept up to the top layer of the atmosphere and covered – for months – the southern hemisphere, dimming the light The sun and cooled our planet.The environmental impacts of the event parallel the consequences of a powerful volcano eruption.

In January 2020, Prof. Koren, from the Department of Earth Sciences and Planets at the Weizmann Institute of Science, and Dr. Hirsch – a former student of Prof. Koren and currently head of the Environmental Research Area at the Israel Biological Research Institute – noticed a serious deviation in particulate matter. , Based on satellite data, showed a deviation three times greater than usual – one of the highest ever, higher than the eruption of Pintubo volcano in the Philippines in 1991. Since no volcano erupted in January 2020, scientists wondered if the blame could be hung on the heavy fire wave. Which struck Australia in late 2019 and faded in 2020 – although rare cases where smoke burned penetrated through the lowest atmosphere; this layer, called the “troposphere” starts from the ground and reaches a height of a few kilometers. Normally, if smoke particles rise to the top of the troposphere, They are inhibited by the ‘tropopause’ – the layer of the atmosphere that separates the troposphere from the upper layer of the atmosphere: the ‘stratosphere’.

A close examination of data obtained from various research satellites showed that the source of the particles is indeed in fires in Australia, especially those that burned in the south-east of the continent. An in-depth analysis of the satellite data even showed that a wide strip of haze in the upper layer of the atmosphere covered the entire southern hemisphere – a phenomenon that peaked between January and March 2020 and continued until the end of July. During this period the smoke travels around the world in the latitude of Australia, completing all the coffee in about two weeks thanks to the uniform and strong winds in the stratosphere.

How did the smoke particles break through the tropopause ceiling and what was special about the recent wave of fires that allowed them to do so? “One clue can be found in another forest fire that occurred a few years ago in Canada,” says Dr. Hirsch. Even then, high levels of particulate matter were recorded in the atmosphere. Width of these: Above the tropics it reaches up to 18 kilometers above sea level, but at the northern and southern margins the maximum altitude is 10 kilometers, so the first factor that allowed the particles to cross the tropopause lies in the simple fact that the distance there was shorter.

“In Chile, breathe the smoke from Australia”

Fire clouds – clouds created by fires – are the way smoke can reach the upper atmosphere. But when examining satellite data, the scientists found that the fire clouds formed only a fraction of the duration of the fires, and they were observed mostly above those that burned in the central part of the coast. That is, the formation of clouds does not explain the enormous amounts of smoke particles that have accumulated in the top layer. The second factor, then, that allowed the smoke particles to find their way to the upper layer is the weather patterns in the strip that surrounds the southern tip of Australia – one of the most turbulent regions on Earth. The stormy wind carried the smoke particles towards the Pacific Ocean, where they merged with clouds that raised the smoke inside them to the top layer.

When the particles crossed the tropopause, they discovered a different world. If below were at the mercy of the various and opposing air currents, in the upper layer the air moved uniformly, linearly and incessantly, leading them eastwards – over the ocean, through South America and the Indian Ocean, and back to Australia. “People in Chile breathed in smoke particles that made their way from Australia,” says Dr. Hirsch.

“For the average person, the air seemed to be more fatherly and the sunsets redder than usual,” says Prof. Koren. “But in practice sunlight is blocked, as happens in volcanic eruptions. Therefore the end result of the scattering of smoke particles in the upper layer is the cooling of the atmosphere. The implications for the marine environment and climate are still unclear.” He said the location of the fire has an impact on the climate: “There are always fires – in California, Australia, the tropics. We may not be able to stop the burning, but we must understand that the exact location where the fire burns has a decisive effect on the climate effect.”