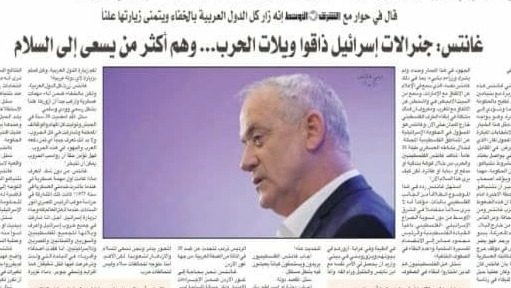 Benny Gantz believes Jerusalem is “wide” enough for the Palestinian capital while still united, according to an interview in a Saudi newspaper published Thursday.

Gantz, who serves as defense minister and other prime minister, told the Arabic newspaper Asharq al-Awsat that “Jerusalem is a city full of sites that are sacred to all”.

“They want and need an entity in which to live independently. State or kingdom, they can call anything they want,” Gantz said. “They have the right to independence and capital which is the solution to all issues that are not closed.”

The seat of Blue & White, however, confirmed that the city, which is also the official capital of Israel, must remain undivided.

Gantz said he did not see peace in the Middle East without resolving the Israeli-Palestinian conflict and called on the Palestinian Authority and its leader, President Mahmoud Abbas, to return to the negotiating table.

“I want Palestinians to be part of the peace process. The effort for normalization within the Arab world is a good and visible opportunity,” he said.

The centrist’s chief also said that Israel will not return to its borders before 1967, which means withdrawing from all captured territories from Jordan and Egypt during the Six-Day War that will be Palestinians are looking for a future state, but the sides can reach a compromise.

The former IDF chief also revealed that he had already visited most Arab states with an immediate visit as part of his military service and said he would like to go on an official visit.

He warned against what he called the “Iranian axis” in the region, saying it posed a threat to both Israel and Arab states, citing countries such as Syria and Lebanon as examples of its corrupt influence.

While Israel sees Jerusalem as an official and inseparable capital, while the Palestinians want its eastern part as their own capital under a bipartisan solution.

Reprinted by permission of I24NEWS