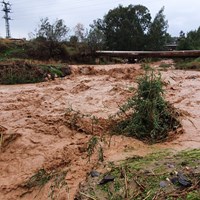 The heavy rains that fell last night led many to go out and see the strong flow in the streams A family of Gush Etzion residents who went to Nahal Oved, which overflowed, discovered to their amazement that their son had fallen into the river and disappeared after being sucked into an underground pipe.

Yagel Eitam, an 8-year-old boy from Gush Etzion, arrived yesterday with his family to watch the flow of the streams due to the stormy weather. They reached Nahal Oved, which flows between the localities of Yad Mordechai and Netiv HaAsara in the Hof Ashkelon Regional Council.

Yagel stood close to the creek and suddenly disappeared. His father jumped after him and discovered that his little son was being sucked through an underground pipe that runs under the road.

His father started looking for him and eventually found him in the bushes, on the other side of the road, when he actually went through the whole pipe from start to finish. MDA staff arrived at the scene and treated the hypothermia from which he suffered as a result of the water source, but by the grace of heaven he did not need to be evacuated to the hospital.

His mother, Shulamit Eitam, told Ynet that “Yagel just slipped and fell into the creek and just disappeared. My husband jumped into the water but it was too late because it turns out that Yagel came out on the other side and actually crossed the road in an underground pipe.”

“I feel like he received his life as a gift. This event could have ended completely differently. We thank God for the miracle he performed for us. We are not digesting it yet, but the main thing is that Shigel is healthy and whole,” she added.

An MDA spokesman said that at 14:41, a report was received at MDA’s 101 hotline in the Lachish area about a child who fell into a working stream and was rescued by a family member. MDA medics and paramedics performed medical tests on an 8-year-old boy who suffered from mild hypothermia and did not need to be evacuated to a hospital.