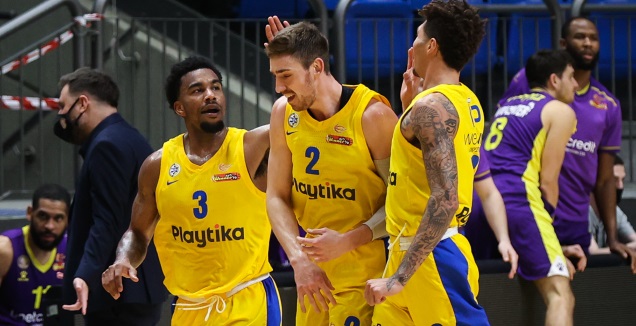 Maccabi Tel Aviv and Hapoel Holon met tonight (Sunday) at Nokia Hall for a game in the 16th round of the Winner Basket League, three days after the crazy thriller in the Cup semifinals. If in the Yellow Cup they needed a comeback from the legends to register a victory in overtime, then in the league the story was completely different and they cruised to an easy 81: 100.

The Yellows started with a storm, went up to a fast 3:15 and despite Dorsey being a few minutes away from the opening, they continued to dominate and went up to 20 points at the beginning of the second quarter. Holon made comeback throughout the game, but every time Stefanos Dadas’ team dropped to 8 points, the champion ran away once more. In the third quarter, the gap reached a peak of 23 points, Holon still returned to minus 8 in the fourth quarter, but Maccabi gave gas and ran away again for a comfortable victory.

In Holon, the only ones who performed were Isaiah Miles with 18 points and C.J. Harris with 14. They also scored for Holon: Maxim de Zhao 11 points, Guy Pnini 9, Oded Brandwein and Tyros Maggie 8 each, Willy Workman 7 and Frederic Bourdieu 6 points.

Sussman scored the first points in Hunter’s assist game, which after a Blazer roof on defense sank under the basket. Holon missed and penetrated Bryant and then a three by Sussman set up a quick 0: 9. Only after 2:20 minutes did Holon’s first points come, but Blazer’s penetration and Hunter’s points from the line raised it to 3:13. After a messy few minutes on both sides, points from Hunter and Jones from the line went up to 3:15.

After 6 minutes Holon scored two more points from the line, but Hunter responded with a dunk. Four consecutive Harris points from the line, two of them after an unsportsmanlike Dorsey, reduced the gap to 8 and then a technical foul by Dorsey led to his dismissal and Harris dropped from the line to 7 points. A three by Pennini dropped to 17:13 and closed out an 0: 8 run, but the Yellows responded with their own 0: 8 run with TJ Klein’s first 4 points in yellow, a basket move and a Bender foul and another point from Dibertolomao’s line after Pnini’s technical , And closed the quarter on 12 points, 13:25.

The second quarter opened with a Harris basket, but Klein responded with a three and another Blazer three raised to 15:31. De Zhao answered with a three on the other side, but Blazer did not stop with another three and a kidnapping of Jones led him to another basket and 18:36. Dadas took a timeout, but back from it another Blazer basket raised to 20 points, an incredible 18:38.

Harris and Miles’ quick threes dropped to 14 points and this time Sapropoulos took a timeout. The Yellows continued to miss, another three by Miles reduced to 38:27 and Maggie reduced to only 8 points with a basket move and an offense to close Holon’s 0:12 run. Chris Jones returned to 10 points, de Zhao and Klein exchanged shots and another de Zhao basket dropped to 42:34, but Hunter responded with a basket on the other side. Miles lowered back to 8 points from the line, but Bryant returned to 10 with a nice attack and set up the halftime score, 36:46, not in front of a big Hunter roof with the buzzer.

De Zhao reduced to 8 points early in the quarter, but Blazer responded with two points from the line and a big roof in Holon’s next attack, and Bryant raised to 12, but Miles’ free throws and Pennini’s basket after Bryant’s loss dropped again to 8 points, 42 : 50 to Maccabi. But the Yellows responded with a quick 0-9 run with five consecutive points from Chris Jones, Hunter’s dunk and points from the Blazer line, and suddenly it’s 17 points again. After another great Halle-Hop miss for Hunter set a 42:61 lead and Dadas took a timeout.

The final quarter opened with a three and a foul by Pnini. Maccabi Tel Aviv got stuck, Maggie scored two from the line and added another basket in a burst and Sapropoulos took a quick timeout with 67:77 on the board, one minute into the quarter. De Zhao dropped to 8 points but an important Bryant basket stopped a 0:10 run. Brandwein lowered back to 8, Blazer Dyke twice from the line, and four minutes before the end of the game Workman reduced to 8 points, 73:81 to Maccabi Tel Aviv. After a point by Jones from the line, a big three by Blazer raised to 12 points, another Hunter basket made it 73:87 and another chin hal-hop raised the lead to 16 points 3 and a half minutes to go and closed the game. Four consecutive points by Yuval Sussman and another basket by Bender increased to 73:95 and until the end Holon managed to reduce to 19 points, 81: 100 yellow at the end.

How Google could turn Android into just another subscription