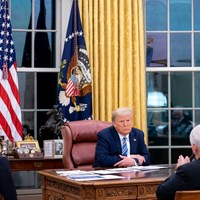 The New York Times published a comprehensive article on the pardons granted by US President Donald Trump during his tenure. 27 of the 238 pardons he granted were to ultra-Orthodox prisoners.

One hacked into the computers of business rivals, another bribed doctors to win referrals to his nursing homes, another fled the U.S. while on trial for a $ 450 million fraud from an insurance company, which led to its collapse.

Each of these and more received a generous pardon from the 45th President of the United States Donald Trump.

They also had something in common, according to a New York Times investigation. They all enjoyed social, political or financial ties with a group of Jewish and ultra-Orthodox Jewish, ultra-Orthodox activists, lobbyists, activists and leaders who worked with Trump administration officials on criminal justice legislation through his son-in-law Jared Kushner.

The combination of all this has led to an impact and expertise that has brought them amazing results. Of the 238 pardons granted by Trump during his tenure, 27 went to people supported by the Alef organization, and the Justice Organization, and the lawyers and lobbyists who worked with them.

At least six of those 27 were pardoned in the official process of the Justice Department during the administration of the 44th president, Barack Hussein Obama.

It should be noted that the Alef and Tzedek organizations worked hard to obtain a pardon only for prisoners convicted of white-collar offenses, the Alef organization turned to judges for years, and tried to lead to lighter sentences, they also appealed to judges to reduce the prison term in individual cases. Social and spiritual assistance, such as relics before holidays, kosher food for prisoners. During the Obama administration it was very difficult to achieve these achievements, because Obama was not attentive enough and aware of the needs of these prisoners, until Trump arrived and everything turned upside down.

The New York Times notes that the two organizations, Alef, and Tzedek, and their allies, played a role in helping pass amendments to federal laws in 2018, and won bipartisan praise and strengthened their power in government, the most important law being the release of prisoners for collar offenses White who have already run the maximum penalty.

Jared Kushner, Trump’s son-in-law, spearheaded the White House law enforcement effort, and also helped oversee the pardon process. He became interested in criminal law, the issue being close to his heart, after his father, Charles Kushner, was sentenced in 2005 to two years in prison for tax evasion, obstruction of witnesses and giving false testimony before the Federal Election Commission.

Rabbi Moshe Morgarten, a Squire follower who founded the Tzedek organization, said that those for whom his organization sought pardon were nonviolent criminals. Mainly for humanitarian reasons, such as illness, and prisoners who left behind small children.

“In almost every case of kindness I dealt with I had some connection with Alef,” Mr. Dershowitz told the New York Times. Dershowitz began working with the Justice Association in recent weeks during Donald Trump’s tenure, and has enjoyed great success on his part.

Rabbi Morganten, who founded the Tzedek Association, took Dershowitz and several other senior lobbyist lawyers. The Kushner Family Charity Foundation, of which Jared Kushner was a director, donated more than $ 188,000 to Alf from 2004 to the end of 2017, according to the foundation’s tax returns, it also donated more than $ 254,000 primarily to the needy and a number of households Knesset.

One of Trump’s first pardons, and the most famous to date, was in December 2017 – this is Hanukkah, to Shalom Mordechai Rubashkin, a Chabad follower who owns the large meat factory in Postville-Iowa, who was convicted in 2009 of bank fraud and sentenced to 27 years in prison. After his sudden release, huge spontaneous celebrations broke out in almost every ultra-Orthodox concentration in the world.

As a matter of fact, the Obama administration in Obama’s time rejected Rubashkin’s pardon request, but Kushner recommended that Trump be commuted, according to a former White House source, and Dershowitz personally persuaded Trump in the case, with organizations, Alef, and Tzedek pushing They, too, for their part.

At a Hanukkah party at the White House the following year, Trump called on Rabbi Morgarten to light the menorah, and thanked him personally for working with legal officials.

Another famous inmate who was pardoned at the end of Trump’s term last January was Shalom Weiss, a Satmar follower from Williamsburg who was convicted in 2000 of evading $ 450 million from an insurance company, which led to its collapse. Weiss began fleeing around the world, before being arrested in Austria and extradited to the United States to serve a sentence of no less than 845 years. Trump pardoned him after sitting for 18 years.