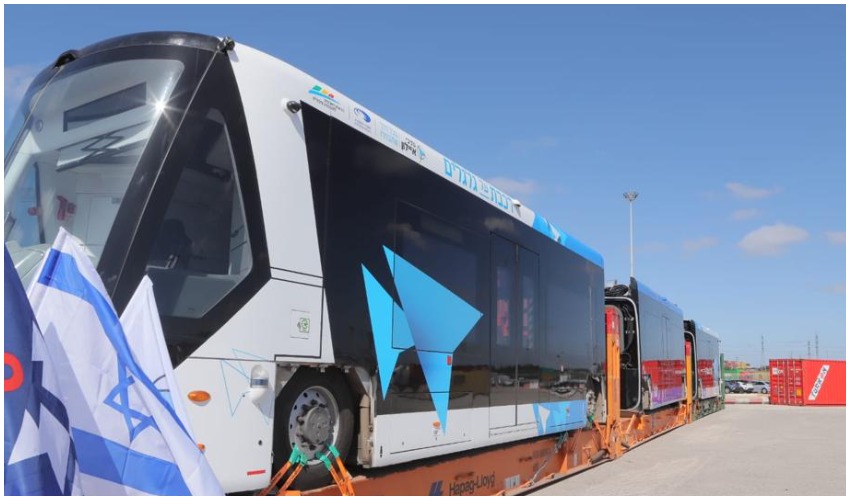 Jerusalem City Council member Elad Malka proposed integrating a ‘train on wheels’ into the city’s transportation system; The municipality rejects the proposal: “In the past, a multi-capacity bus, fully electric, arrived, which did not pass the challenging topography in the city, so this proposal is not relevant.”

More than a week ago, the first vehicles of the “Railway on Wheels” (ART) arrived in Israel in order to examine the potential use of this means of transportation, this means of transportation is of great interest to the Jerusalem City Council and was discussed earlier this week at the monthly Jerusalem City Council meeting. The proposal arose as an option for operating the train on wheels along the route planned for the construction of the purple line of the light rail – planned to pass from Kiryat Hayovel to the Commissioner’s Palace.

It is a semi-autonomous electric means of transport, designed for mass transportation that ranges from 220 passengers to 450, and is actually a combination of a bus and a light rail, with the interior space of this train with many similarities to a light rail. The tool does not travel on a track but on the road, and it does so by following a virtual track marked in color in the center of the lane.

During the council meeting held earlier this week, opposition member Elad Malka (Awakening) suggested council members examine and promote the use of the train on wheels, and then work with the Ministry of Transport to have the purple line serve as a national pilot for the new train.

“Along with the dramatic reduction in the timetable for operating the Purple Line, which is currently expected to start operating in 2030, and to save on its construction and operation costs, there is another advantage in choosing the wheeled train option,” Malka adds. By rail on wheels will eliminate the ‘rail monopoly’ that exists today, and will have additional value that will be reflected in several ways, one is the flexibility in case of a road fault that can be easily bypassed, as opposed to a rail fault that disables all train traffic until repair. “The number of scenarios for which the train will be shut down is significantly lower than on a rail train. Even in the event of a single train malfunction, it will not be necessary to stop all train traffic on the line, as it will be easy to overtake the malfunctioning train without injuring other passengers.”

Malka also writes in his proposal, “A second advantage of a train that does not travel on a track is that even in the event of a malfunction in the train itself, a malfunction that requires stopping the journey, it will be easier to transport passengers to the destination by bus, as opposed to a similar case. “By using a train on wheels, it is possible that private vehicles will be able to use the train route as a normal route on Saturdays and holidays when the train does not operate.”

The purple line is expected to pass through the neighborhoods of Kiryat Menachem, Kiryat Hayovel, Ramat Danya, Ramat Sharet, Malcha, Gonenim, Talpiot and Armon Hanatziv. As reported in “Kol Ha’ir”, after a struggle by the residents of the Commissioner’s Palace, it was decided that the route of the purple line would also pass through their neighborhood. The length of the route is about 12 km and it includes about 18 stations.

In response to the request of “Kol Ha’ir” – the municipality stated in response that “the transportation technology through the said ART, is completely new and originated in China. At this stage there is no evidence of its capabilities and reliability. Many questions arise regarding traffic in mountainous terrain, dealing with Israeli weather, real energy consumption Of the “train on wheels” and the like. “

The municipality also said that “the staff of the master plan for transportation is working with the Ministry of Transportation to make sure that the experiment, which is currently underway in Israel, includes all the characteristics and needs of relevant lines in the Jerusalem metropolitan area.” “So the road to approving this technology as suitable (if at all) for the Israeli infrastructure is long. Therefore, this proposal is not relevant.”