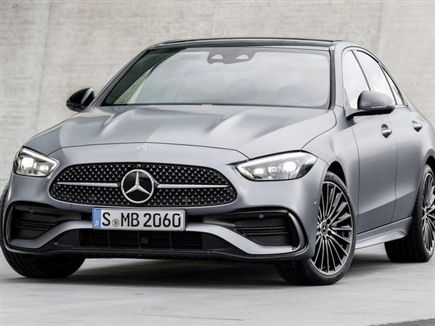 Mercedes unveiled last night (Tuesday) the fifth generation of the sports car-sedan C-Class, in what appears to be one of the technological turning points in its entire history, since it was introduced in 1982. Mercedes notes at this point that it has amassed over 10.5 million sales in the past 40 years and despite the demand for SUVs, it still maintains great popularity in Europe, the US as well as China, which in 2016 became the most lucrative market for this series in the face of its uncontrollable hunger For conventional 4-door vehicles.

Mercedes executives describe the C-Class as a logical continuation of the dynasty with technological adaptation to the electric age, among other things by installing a state-of-the-art hybrid plug-in system with increased driving range on a new and flatter battery, improved safety sensors and a second generation The most advanced MBUX, as it was displayed aboard the flagship Mercedes S-Class, albeit with an aesthetic change committed to their method: tilting the screens to guide the driver to sharpen the dynamic experience.

As always, it all starts with the exterior design and the C-Class does not stray far from its family sources of inspiration. It adopts a similar approach to its predecessors and is likely to pick up classic settings like “Baby E Class”. Mercedes says they “designed the C-Class in the” sensual purity “approach with sporty proportions, smooth surfaces, a long hood that creates a harmonious silhouette from one end to the other, an updated and large grille, short streaks and a prominent waistline. The people who signed its design say That she is “seen in motion even in standing.”

In terms of space, there has been an improvement in almost all internal parameters; The distance of the elbows was increased by 2.2 cm in front and 1.5 cm at the rear, the headroom from the ceiling in the second row increased by 1.3 cm, and for higher than average Mercedes increased the leg area between two rows and one row by 3.5 cm . A closer look reveals that it is 6.6 cm longer than its predecessor, 1 cm wider, the wheelbase has increased by 2.5 cm and the height is 9 cm smaller. The trunk remains the same with about 455 liters.

The interior space, as mentioned, is also a kind of scaled-down replica of the S-Class and in the same “holistic” approach that allows to choose from a variety of features according to the driver’s choice. The technology that dominates here is huge floating LCD monitors with a very high resolution with a choice of sizes ranging from 10.25 inches to 12.3 inches, with behind all this pyrotechnic performance the voice MBUX control works through which a series of commands can be executed – simpler or more complex. The list of extras, standard or optional is very long, and we will only mention napa upholstery in seats or upholstery, wood trim, cooled and heated seats, top display with multi-layer projection, bi-regional climate control, state-of-the-art LED lighting system and even remote control of residential systems through the -MBUX (although this approach is subject to communication with electronics manufacturers who support it).

The engine class of the C-Class is deep and varied, with petrol, diesel and a new plug-in, all 4 cylinders. The petrol units include the C180, the C200 with rear or dual propulsion (both with a volume of 1.5 L), the C300 and the C300 with dual propulsion (volume 2000 cc). The power starts with 170 hp, Switch to 204 hp, and up to 258 hp, with acceleration to 100 km / h in 6 seconds and up to 250 km / h electronically controlled in the powerful version. The diesel models have two versions on the shelf, the c220 and the c300, with outputs of 200 and 265 hp respectively, with the latter accelerating from standstill to 100 km / h in 5.7 seconds. All motors are connected to a 9-speed automatic transmission, starter-generator and a 48-volt battery for managed energy consumption, i.e. set to “hybrid-moderate”. Another option on the dynamic side is a rear-wheel drive system that operates in the opposite direction to the front wheels at speeds of up to 60 km / h, thus reducing the steering radius by 43 cm and reducing the steering wheel rotations from 2.35 to 2.31.

The highlight of the C-Class is the plug-in hybrid engine, although the full details about it have only been partially revealed, because it will be added to the family in the second beat. The infrastructure of the unit is the 2.0 L engine from the M254 series, and it is available in diesel or gasoline. The combustion engine will provide around 200 hp minimum, the electric motor will add another 125 hp and 44 kg and the battery with a capacity of 24 kWh. It can be inferred that the maximum, weighted power will be somewhere in the 315 hp range. 57 kg, but the most important detail is that the battery will be enough for a driving distance of 100 kilometers until it is discharged, which is about twice as much as most existing plug-in models today. Charging will be fast on external infrastructure – only 30 minutes and all plug-in models will be equipped with adaptive air suspension The speed on electric propulsion is limited to 140 km / h.

Mercedes manufactures the C-Class at 3 strategic points in the world: China (Beijing), South Africa and for Europe and Israel at the German plant in Berman. The importer Colmobil told Olam Vehicle that it will arrive in Israel in July of the current year.