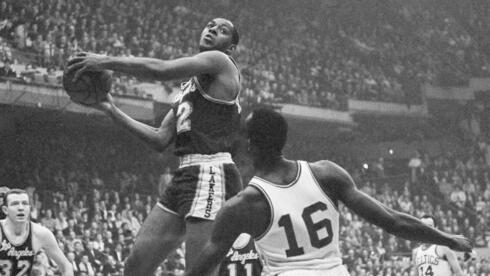 Sometimes a fairy tale is born as soon as it does or says something unacceptable, and everyone points to and to it and shakes their heads in grief of “I do not know what happened to him.” In 2009, at age 75 and after 22 years, most failed, as Los Angeles Clippers CEO Elgin Baylor was fired. He filed a $ 2 million lawsuit alleging discrimination Against the background of race and age.

Baylor was persuaded to drop the lawsuit on racial discrimination and in 2011 the jury dismissed his age lawsuit, but in 2014 the Clippers’ racism abscess, Donald Sterling, exploded and he was expelled from the league. “We should have heard of Algin as early as 2009,” said Magic Johnson. Just for surviving 22 years with Sterling in the same organization deserves Baylor to get the code to heaven.

This is roughly the story of Elgin Baylor, the Lakers legend and one of the greatest players in NBA history who passed away yesterday (Monday) at the age of 86. He was always ahead of his time – and he always lost.

Sometimes a sports legend is created from the most unexpected materials. It is named after the watch his father wore at birth, did not play until high school because the playgrounds in Washington, D.C. were closed to blacks. He moved from high school to high school because of problematic academic accomplishments that allowed him to receive a scholarship only to a remote college in Idaho. After a year he moved to the University of Seattle, and because of college rules had to be frozen from basketball for a year. At the end of that year he was selected by the Minneapolis Lakers in the 14th round of the draft, but Baylor preferred to return to colleges.

In his sophomore year at university he took the team out of nowhere for the college finals, and lost to Kentucky. He was selected first in the draft, again by Minnesota. To entice Baylor not to go back to university the owner gave him a salary of twenty thousand dollars. “I had to bring him in to save the team,” owner Bob Short said at the time. “Without him we would have been simple and there would have been no more Lakers.” In his first season in the league, Baylor won the Rookie of the Year title and led the Lakers from a 53-19 record to the NBA Finals, where they lost four games to Boston.

Sometimes a sports legend is the sum of its numbers and records. He scored 55 points in his first season, 64 in his second season – a Lakers record broken just 45 years later by Kobe Bryant – was the first to score over 70 points per game (against the Knicks in November 1970), a record broken 15 months later by Wilt Chamberlain . In 1962 Baylor scored 62 points in the fifth game of the playoffs against the Celtics, a record for a series to date and a record in the playoffs that lasted 24 years until he was broken, in a two-over game, by Michael Jordan. Sometimes it is possible to determine what a legend is according to who breaks its records.

Those 62 points gave the Lakers a 2-3 lead over Boston, but Boston won the series by seven games. In all, Elgin Baylor reached eight finals and lost in all of them, seven of them to Boston, three in game number seven. But it’s a little less material for legends.

In 1960 the Lakers migrated to Los Angeles. Jerry West joined the team and together with Baylor they formed the deadliest duo in the league, turning the Lakers into the boastful, rich, glorious and glorious product it is today. Baylor averages 34.8, 38.3 and 34 points per game in his first three seasons in Los Angeles (one of which he only played on weekends because of his reserve service), but even those numbers are nowhere near explaining the revolution he brought to the game.

It was a combination of power and elegant grace. Dancer with jump shot. No one jumped higher than him and no one stayed in the air longer than him. He actually invented the penetration of the basket and included in art the jump shot with a release at peak height. A Knicks player said after a game in which he kept it: “It’s like he has three hands or two balls. It’s like keeping a flood.”

Since Baylor’s Revolution was not televised, there are almost no visual memories of it like cruising in the air, body twists and head deceptions. He took the game from the hardwood floor to an aerial acrobatic show. He was the model for basketball to be played long after him. He opened the hatch to “black” basketball. He gave the Blacks inspiration and courage to play their basketball, he brought the spontaneous attack to the hall, and made the defense respond and adapt itself to it. Dr. J., Jordan, Bryant, and LeBron James all walked in the air in a way that Baylor weaves.

If you ask a Lakers fan he will tell you that of all the things that happened in 1969 (the Nixon inauguration, the bombing in Cambodia, the Manson family’s murder spree), there was nothing worse than the final series between the Lakers and Boston. The Lakers hosted the seventh game. West, Baylor and Chamberlain smelled the blood of the injured Boston. The owner had already raised hundreds of balloons to the ceiling of the hall in preparation for the championship celebrations, and the Lakers lost. again.

Jerry West scored 42 points in the seventh game with a broken nose and a bandaged leg and was named the series’ most effective player despite the loss. That season his hologram was chosen to be the league’s logo. Baylor established himself as a poster of cosmic injustice, to the lack of a way out of the loss, to the almost sweet pain of defeat. The differences between them were already created when West and his white teammates were admitted to hotel accommodation in away games, while Baylor was expelled from them. After retiring, while Baylor was tortured under Sterling, West built championship dynasties with the Lakers and Golden State.

In 1965 Baylor was injured in the knee, an injury from which he no longer returned to his former fitness. In the 71/72 season he returned for the last season on the team, after an injury last season allowed him to play only two games. He retired after nine games. In the game after his retirement the Lakers started with a streak of 33 wins, the longest streak of a sports team, and won the championship.

And maybe legends are what corporate logos say about them after they die. “He was like a dad to me in my early years in the league,” Jerry West said yesterday in response to Baylor’s death, “I loved him like a brother. He was a prince on and off the field.”