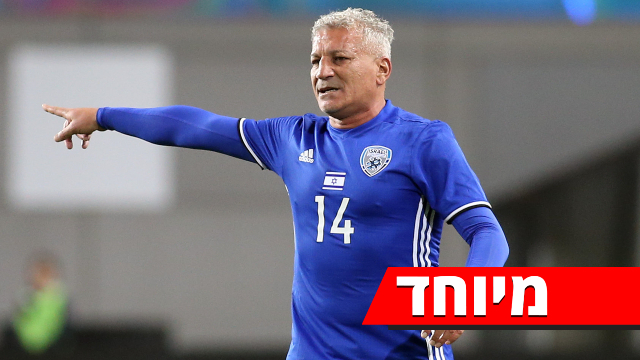 Players who changed positions on the pitch during their careers have already become a kind of curious myth in the world of football, but in the case of Moshe Glam it was a life-changing move. Glam, who grew up as a striker in the youth department of Betar Netanya, was converted at a very young age to the position of left defender – although his strong leg on paper is right. The person responsible for the change was Shia Feigenbaum, who coached him at the beginning of Betar Netanya. And perhaps it is more correct to say that it was the late chairman Bro Hayun.

Also in the project we found the afikoman:

“My first game in the national league (the top league in Israel then), was the Netanya derby, I was 16 and a half years old. We hosted the game, Shia was the coach. When Shigal Menachem got up to warm up at Maccabi, I remember the late chairman Bro Hayun saying to Shia “Heat Glam because Yossi Yonah will not get along with Menachem’s speed.” Yonah was already a veteran. Menachem came up and even before I had time to enter he made it 0: 1 and only then did I enter. Regarding that team where he made his first steps, Glam says: “It was an amazing team, with Israel Fogel, Vicky Peretz, Shlomo Kirat who repented. I had one goal that season, against Mario Zukowitzky, it hurt me so much When I heard he passed away this month“.

In the last game of his career, however, Glam is not really able to remember. “Not closed against who it was. It was with Kfar Yona, in the first division at the age of 40. I remember that season, I scored more than 20 goals, I played as a striker. At this point I could no longer burn the line as a defender, against some boy. 18 who sees in front of him Moshe Glam and even more wants to prove himself. “

If you count all three terms at Maccabi Netanya, Glam (52) – until the Corona crisis an active player in the Veterans League – had 11 different stations in Israeli football, most of them in the Premier League, to which should be added 30 appearances in the Israeli national team uniform. With Maccabi Haifa, he won the championship and the cup.

What did you do after retirement?
“At the end of the road I played with the graduates of Kfar Yona and at the same time I managed the youth department. I had six amazing years there. As a player on us from the third division to the first division. The youth department there I gave a score of nine out of 10. There were amazing people, Eric Fox and Moti Timor “I coached a group of children and managed the youth department, I was there until 2012. When I left I continued to work with children in the Hefer Valley at a club that belongs to Vicky Glam (no family connection).”

But then something changed. Maybe in his face, and maybe in the industry he loves so much. “Suddenly I got tired of football, my hunger to give of myself was no longer the same. I met non-caring players, parents who started to play themselves too much. Instead of taking to heart and eating myself, I said it was time to stop. I played for Maccabi Haifa veterans and then I continued In the veterans of Kfar Yona. ”

He later served as a football commentator on the radio. “I worked in the B network. I must say that I did not enjoy football, there were moments in front of a full stadium that I wanted to go down to the grass to play. Sometimes I did not understand how you can look so bad, for example as a Maccabi Haifa player when 30,000 people push you. “A player feels the players. The industry has developed in terms of infrastructure, but in net football – we are going backwards in the last 20 years.”

Glam has an explanation: “It starts with owners who are easily fired, so every coach is afraid of his chair. Football becomes cowardly. Already in the youth departments, they are first taught how not to lose, and here begins the blessing. What do you come to see? Football is a show, it’s a show All the coaches I worked with, Shia, Sharaf, Giora Spiegel, Abram Grant – they all loved happy football and encouraged us to attack. Today, even when the offensive line-up is on paper, an attacking player gets so many defensive tasks he first thinks’ only my defender will not be involved. At the gate. ”

He also recognizes the same attitude in national team coach Willie Rotensteiner: “Either he made an alibi for himself, or he tried to put the opponent to sleep, but before the game against Denmark I heard him say sentences like ‘If we take this point there will be a surprise, our chances are low’. “You have to believe, you can’t come as a loser in advance. In France, Sharaf said, ‘Come on, attack and enjoy the game,’ do you know what confidence that gives a player?”

There are sounds you recognize even without seeing what is happening across the line, and during the interview I hear him lighting a cigarette on the other side. “I have been smoking for 35 years. All my coaches knew this. Out of respect I told them and did not smoke in public. I asked to be judged solely on the basis of ability. Since I was a teenager I would come home from school, throw away my bag and go to football, and I have always kept On my body and I was fit. ”

To understand what it exactly means to smoke as a professional footballer, the best indication I could think of was that huge 2: 3 over France in Paris, where Glam was one of the standouts.

Some cigarettes, for example, you smoked the day before this game.
More than a box. All my career I smoked between a box and a half box. I’ll tell you more than that, sometimes in half a game, if things were not going well for me, I would go to the bathroom and smoke some half a cigarette fast to relax. I have never touched alcohol or other smoking in my life. “On casino gambling, a topic that has made headlines many times, he says:” I have never crossed the line. I earned well as a footballer and allowed myself. I met at the casino with a lot of active players in big European teams. ”

On the fence after a victory in the Maccabi Netanya uniform over Maccabi Tel Aviv (Photo: Reuven Schwartz) ” aria-hidden=”false”/>

Was there a crisis after retirement?
There were hard times, even financially. Suddenly you drop your salary level drastically, you do not see it coming. But on the other hand I have seen the whole world twice. And the smile will never leave my face. In recent years I have been managing a logistics warehouse for the “Hot Staff” company, which markets toys, including motorized ones. I work on a large vehicle and have my own warehouse. “My two managers, Lior Tobol and Shai Mugrabi, played with me at Betar Netanya. They really wanted me to come in and work with them. I really like the job and meeting people.”

Glam’s optimism grows first and foremost from a place of deep faith in God. One unusual story about an event that restored this belief and gave it a cold force a few years after retirement, and one can also learn from it something from the background in which he grew up, as the third of nine in a family that things did not come easily to.

“At the time of my downfall, we were supposed to be with my mother at Shabbat dinner. This is a woman who is a role model, who raised nine children alone. My father passed away when I was 12 and my little brother was a year old.

“After this weekend I had to transfer a large sum of money that I did not have for a large purchase I made. Before dinner I told my mother that I was going out to freshen up and she asked me not to linger because my brothers and sisters would be coming from the synagogue soon. I saw she was in tears because I did not tell Her what I’m going through, I always preferred to keep inside. I went out and walked alone to the sea, and sat there until 23:00 at night. I keep Shabbat but sat and smoked, and while I started talking to the Creator of the world. I poured out my heart, I asked him to help me find a way to pay. I came home late at night to eat, so that my mother would see that everything was fine. The next day, Saturday night, a friend told me there was a lottery, I said come on I will fill in. The amount I had to pay on Sunday was close to 40,000 shekels and that is the amount I won in the form I filled out. “I did not understand, I said to myself, ‘Creator of the world, I spoke to you with a cigarette in my mouth.’ It was an event that strengthened me.”

What was your biggest moment in your career?
“I fell in an amazing generation of players, Berkowitz, Hazan, Atar. Arriving at Maccabi Haifa was a dream come true and within a year I also reached the team. The games with Haifa against Pharma in the Cup holders were a record moment.

What was the worst moment?
In the penalty shootout against Maccabi Tel Aviv in the semi-finals of the 1992/93 season. I had an amazing season there, but I missed a crucial penalty.

What is the most important thing you learned in football?
Love the game.

What is the thing you miss most in sports?
For break-ins in the wing. I had an extraordinary natural speed. If I see a game today I look mostly at wingers. I imagine myself in Sami Ofer with 30,000 people pushing me. You have to play with the right players, who give the perfect streak at the perfect time. I was lucky to play with such connections.

If you were to meet yourself today when you were ten, what would you say to yourself?
Be financially calculated, and tidy with your moves in life. One of my biggest ailments is cleanliness and order. I say to myself sometimes I wish I was conducted in life as I maintain order inside the house.