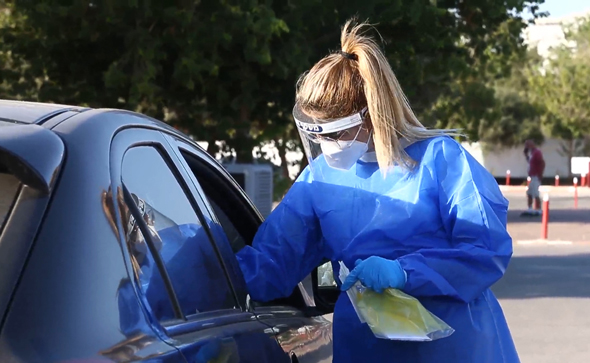 13:20 – Approaching the restrictions is approaching: The Corona cabinet will convene on Sunday

The Corona Cabinet is expected to convene this coming Sunday to discuss a possible transition to “tight restraint.” The cabinet meeting, which will begin at 9 a.m. and last until 2 p.m., will take place at the weekly canceled cabinet meeting. In accordance with a previous decision to reach an average of 2,500 patients daily, the ministers will decide whether to close all shops, street shops, markets and schools in red and orange cities (except kindergarten to fourth grade) and reduce public transportation by 50 percent.

According to the latest update from the Ministry of Health, from midnight to 10:00 this morning, 950 new infections were diagnosed in 24,000 tests. Thus, the positive rate in these tests stands at 4%.

11:20 – Cyprus will open its borders to 56 countries around the world, including Israel on January 15

The city of Limassol in Cyprus Photo: Shatterstock

08:48 – The director general of the Ministry of Health enters solitary confinement after being exposed to a verified corona patient

The director general of the Ministry of Health, Prof. Hezi Levy, went into isolation after being exposed eight days ago to an office worker who was found to have verified corona. Levy tested his corona during the night and the test result was negative. He is feeling well and continues to conduct the national vaccination campaign. Public Health, Dr. Sharon Elrai Price, went into isolation. (Adir Janko)

The Ministry of Health reported that in the last day, 2,802 people were diagnosed as infected with corona, out of more than 80,000 tests performed. The positive rate was 3.5%. In hospitals across the country, 400 corona patients are hospitalized in critical condition, of whom 150 are connected to respirators. 3,033 corona patients died in Israel from the outbreak of the plague.

Data from the Ministry of Health published this morning show that in the past day, 2,802 new verifications of the corona virus have been diagnosed. The positive rate is the same as on Tuesday and stands at 3.5% in more than 80,000 tests performed yesterday (Wednesday). The number of hospitalized patients continues to rise and this morning it stands at 705, including 400 patients who are hospitalized in critical condition. 150 of them are connected to soul machines. Since the outbreak of the plague, 3,033 corona patients have died in Israel.

The data this morning are published against the background of the assessment that Israel will reach the threshold set by the Corona Cabinet in the coming days for the transition to “tight restraint.” The set threshold is 2,500 patients daily on average – which will result in the tradability of all commerce, street shops, markets, schools in red and orange cities (except kindergarten to fourth grade) and a 50 percent reduction in public transportation.

Today, the Ministry of Health is expected to hold a discussion on turning all the countries of the world red, so that every Israeli who returns to Israel from abroad will be obliged to isolate.

Sources in the health system estimate that Dr. Elrai-Price’s initiative may encounter difficulties both from the Ministry of Foreign Affairs and political parties, but also from parties within the ministry who oppose the initiative, such as Deputy CEO Prof. Itamar Grotto and International Department Director Dr. Asher Shalmon.

According to the Ministry of Health, 245 Israelis who returned from abroad since the beginning of December were found positive in Corona. 30 of them returned from the United States, 26 from the UAE, 16 from Turkey, 27 from Ukraine, 11 from Russia, 8 from the Netherlands, 4 from the UK and the rest from other countries. (Yaron Druckman)

08:00 – Kish: It is not certain that the intelligence collected by the Shin Bet Law should be given up

Deputy Health Minister Yoav Kish said this morning in “Here” that it is not certain that it is right at this time to give up the benefit and intelligence collected by the GSS law.