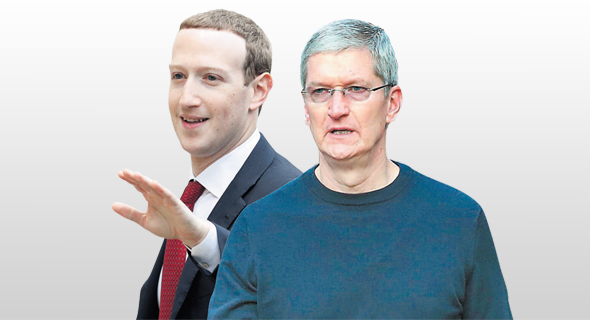 Facebook is very fond of talking about small businesses, especially during the Corona period. The social network wants to establish an image of those who help small businesses reach new customers through targeted advertisements. The company very much wants us to think about how much it helps small businesses, because then we are less likely to think about how much it infringes on our privacy, and how it has turned the Internet into a sophisticated information gathering machine that allows it to make billions of dollars at the expense of users.

This distraction strategy is also used by Facebook in the new battle it launched this week – against Apple. At the heart of the battle: a change in the iPhone’s operating system that will allow users to have greater control over their information, and prevent companies like Facebook from monitoring their activities outside of its platform. But Facebook does not want you to think about it. Instead, it promotes a narrative that if Apple implements this change, small businesses will be harmed and may end up Bankruptcy.

However, this narrative shows that Facebook is the one suffering from bankruptcy, at least when it comes to its status in the eyes of its users. Facebook knows that users do not trust it or like it too much, and that its only way to win the battle with Apple is to get them to think about small businesses.

The change, which Apple will implement in early 2021, will allow users to prevent iPhone apps from using an identification tool that allows them to monitor user behavior on other apps and websites. Such tools allow companies like Facebook to collect information about users even when they are not on its social network, thus enriching their personal profile and showing them segmented and more expensive advertisements. If, for example, Facebook knows that a user has started browsing flight search sites, it can show him a relevant advertisement from a competing site, or from one of the sites he has visited and offers him to complete the purchase of the ticket again. If she knows he was looking for flights to a particular country, she can show him an advertisement that offers tempting deals to that country.

Apple, which has made privacy one of the key products it sells to its users, periodically incorporates various tools to limit the ability of other companies to collect information about their activities. Browser sParis For its Macs, which includes a built-in monitoring tool, and also presents the user with a privacy report on the monitoring activities of various sites. With the launch of the update to its operating system iOS 14, Apple planned to include a tool that will allow iPhone and iPad users to prevent applications If you wish to continue to do so you will be required to present the user with a notice requesting his permission to monitor his activity, plus an explanation on his behalf as to why the monitoring will be used. The user will be able to choose whether to approve or reject the request. So scared.

Following pressure from app developers, Apple has postponed the launch of the feature from September 2020 to early 2021, and now that the year is coming to an end, Facebook is launching an extensive campaign against its application, a campaign that puts small businesses at the center. The company has launched an anti-change propaganda site, titled “Small Business Deserves to Be Heard.” “Apple’s latest update threatens custom ads that millions of small businesses rely on to reach customers,” the website said (https://www.facebook.com/business/apple-ios-14-speak-up-for-small-business ), Which also includes videos and heartbreaking testimonials from small business owners. “I do not know what will be done,” said one of them. “It’s going to kill us. I do not know where my business will be if I can not display a custom advertisement.” The company also purchased a full-page advertisement in several leading newspapers, including The New York Times, The Wall Street Journal and The Financial Times, which conveys similar messages.

In a post she published on the subject, Facebook raises unsubstantiated allegations, such as blocking monitoring, forcing free services to turn to routes such as paid subscriptions or collecting payments within the app, as it claims it will prevent targeted advertisements from appearing. And to further obscure the picture, Facebook said it would provide information for the (unjustified) media lawsuit being developed by Fortnite, Afiq Games, an administrator against Apple over Appstore’s restrictive policies. In doing so, a company, whose ownership we will also mention WhatsApp and Instagram, is trying to position itself on the side of the small entities that are fighting a just war against the evil technology giant.

There are some issues with Facebook’s argument. First, the company’s central thesis is that blocking monitoring will prevent it from targeting advertisers. It states that once the feature is enabled, the company will not be able to display custom ads. This is not true. Facebook still collects considerable amounts of information on the various platforms it owns – the social network, Instagram, WhatsApp, Messenger – and by other means. Even if it is limited to collecting information from its own network, it will still know which groups we are members of, who we talk to and what, what links we clicked on, who we follow on Instagram, even which businesses we communicate on WhatsApp (though not on what We talked to them). Given the scale of activity on these platforms, this is a huge amount of information that can be used to create a highly segmented personal profile. Facebook will always be able to display targeted advertisements, regardless of the information it collects through its iPhone app. It is also likely that these capabilities will meet the needs of most small businesses. If anyone is really hurt, this will be the bottom line of Facebook and not the business it purports to protect.

Which brings us to the second issue: the jarring lack of due diligence. Facebook talks about small businesses and the war on large corporations, but conveniently ignores the fact that change is endangering it first and foremost, and its considerable revenue. Facebook makes a lot of money from its ability to sell segmented ads. If its information gathering capabilities are limited, its segmentation will be less successful and advertisements will be less expensive. Facebook doesn’t really care about small businesses, but the bottom line in its coupon. But it is impossible to build a public campaign that mobilizes to protect one of the most hated companies in the world today, so instead it draws attention to small businesses.

The third problem was highlighted in Apple’s response to Facebook’s attack. “It’s just a matter of protecting our users,” the company told U.S. media. “Users need to know when their information is collected and shared between apps and sites, and should have a choice whether to allow it or not. Transparency in app monitoring in iOS 14 Without requiring Facebook to change its approach to monitoring users and creating targeted advertising, it simply requires it to provide users with a choice. “Apple’s senior vice president of software engineering, Craig Federigi, said this more bluntly in a speech last week: These arguments should be seen as they are: a rude attempt to preserve the status quo of invasive privacy. “

Users are of course completely absent from Facebook’s attack on Apple. The question of their privacy and their empowerment is not in the company’s propaganda campaign. There is a good reason for this. The social network knows that on this front it is easily losing. Facebook has zero credibility when it comes to protecting privacy, and has no ability to win a war waged on this front. Had that been the case, she would not have been required for this extensive campaign. She would simply explain to users why her monitoring was necessary and trust that the vast majority would allow it. But she knows it will not happen; Users are so disgusted and afraid of her that they will take every opportunity to limit her obsessive information gathering.

So she tries to change the discourse, to move the argument to another arena. To pressure Apple through small businesses, maybe even run regulators and legislators who will block the change, which will actually take the power out of the hands of users and leave it in the hands of Facebook. This is not a story about small businesses that are going to be knocked out by an arbitrary decision of a predatory corporation. It’s a story about a struggle between two huge corporations. One of them, for business reasons entirely by the way, is in this case on the side of the users and seeks to protect their privacy. The second, fears a loss of revenue and uses all its resources to spin spins and run campaigns in order to create a smokescreen that will obscure its true intentions.

Facebook very much wants you to talk and think about small businesses, and it intends to invest serious sums in that. But keep in mind that in the end there is a story of personal choice, and of an information collection and processing company that wants to deprive you of it. Everything Else? Just background noise.