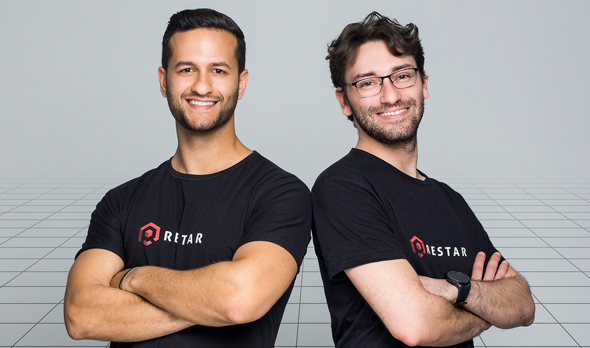 The American company Unity announced today the acquisition of the Israeli start-up RestAR. Restar has developed technology for 3D scanning using mobile devices designed to improve the shopping experience on commercial sites. Details of the deal have not been released, but Marstar said investors in the company would enjoy a high return on investment of up to 7 times in less than two years.

Restar, the first company that Unity acquires in Israel, will become the official R&D center of the American company in Israel. The company’s employees will join Unity from the company’s offices in Tel Aviv, and Rstar intends to expand its operations and recruit additional development personnel. Unity (NYSE: U) is considered the world’s leading platform for creating 3D content in real time for a variety of industries and fields: gaming, the automotive industry, architecture, the film industry and more.

Restar was founded about 3 years ago by Bar Surf and Shimon Wiener. The company started as a start-up that provides a solution for businesses in the field of restaurants, with the help of building augmented reality menus in 3D. However, they later realized that the real challenge is to create 3D content for the e-commerce market, and that there is no effective and high-quality solution in the field.

Creating high-quality 3D models is an expensive and time-consuming process, and Restar’s technology allows products to be scanned in just one minute from the mobile device, without any technical background or the use of special hardware. The videos themselves are processed and compressed in the cloud. Among the company’s customers are fashion brands and e-commerce platforms like UGG, Off-White, Wix, Dafiti, Hoka One One, Palm Angels, Heron Preston, and many others.

Restar has raised nearly $ 2 million to date. Investors in the company include Wix Investment Fund, Accelerator 500Startups, Walmart President in former Latin America and founders of the fashion site Dafiti and other investors. The company stated that it was faced with the possibility of completing a total round of raising $ 3 million, but chose Exit because the combination with the buyer would allow for significant and rapid growth of the product and technology in the world.

Restar is one of the technology companies that received a boost from the Corona crisis. In the run-up to the crisis, the company found it difficult to close on new customers as awareness and the need to display 3D products and augmented reality were quite low. However, the closures have led many fashion brands affected by the closure of stores and malls to contact Restar for solutions to increase online sales and lower product return percentages. In a short time, the company recorded an increase in revenue and customer volume.

‘The Corona crisis has created new consumer behavior and a change in the world of commerce. The global expansion of the e-commerce industry requires merchants and brands with a strong digital presence, differentiation, and rich user experience. Along with Unity, the world’s leading 3D platform, we can change the rules of the game in creating visual content for businesses and marketers around the world, so that without any prior knowledge, any business owner can provide the best selling experience for his consumers. ” CEO and founder of the company.

The American giant Unity, which is currently traded at a value of close to $ 40 billion, employs over 3,000,000 people worldwide, including a research and development team of about 1,800 people. The apps developed by creators on the Unity platform have garnered more than five billion downloads each month in 2020.