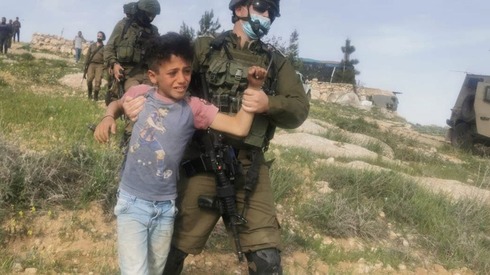 Thanks to two recent events in the South West Bank, the stark difference between settlers and Palestinians when it comes to re-enforcing Israeli law has captured the public’s attention .

Five Palestinian children, aged 9 to 13, want to get close to some homes in the Havat Ma’on settlement area while picking the edible plant Gundelia (‘aqub).

An armed force, consisting of at least two commanders who were chief officers, sent them to the police station in Kiryat Arba city.

Not surprisingly – with their previous experience – so far they have avoided arrest and punishment.

This correlation clarifies, once again, the symbiosis between settler attacks and state violence across the rural West Bank.

Israel is hiding shepherding and farming communities that are among the poorest groups in Palestinian society, in an effort to drive them out of their homes.

Ze’ev Hever, one of the architects of the settlement campaign and leader of Amana, recently described the group’s modus operandi: managing settlements known as “agricultural farms” that have access far beyond the area. built by them as their flocks are in great need. grazing land.

According to Hever, “the building will not take up much space, for financial reasons. It took us more than 50 years to get to 100 square kilometers.”

Stock farms, on the other hand, “control more than twice the area of ​​built-up communities… one farm can protect several square kilometers of land.”

What is meant by “protected” land? Contrary to Hever ‘s bucolic description, the young settlers in these areas use a regime of violence and oppression against Palestinians who live nearby or would graze the herds in the area, all with full state support.

Hever is right, however, that the impact of these small settlements extends far beyond their built-up areas, a mission for which their residents make a great effort. They roam large areas far from the farms, attacking and driving out Palestinian shepherds or farmers.

As for the Alayan family, it is the Palestinian victims who came for a picnic on their own land.

Many Palestinians have just dismissed protests about these attacks, having learned from experience that the Israeli law enforcement system gives them no protection.

As revealed in a recent report by Kerem Navot and B’Tselem, about 40 such agricultural farms have been established in the West Bank over the past decade.

The fact that they are illegal even by the definition of Israel (although all cities are illegal under international law) raises very few eyes. It is common knowledge that these pirate expeditions seem to be backed by the state.

This is the “defense” of Hever’s land: a strategic, systematic violent campaign to evacuate Palestinians from more and more parts of the West Bank, to pave the way for state takeover and the construction and expansion of settlements ” official ”.

The establishment of these “farms” and the violence of the state-backed residents are crucial in Israeli policy, which hinders the development of any Palestinian development on the West Bank.

As part of this policy, Israel has launched a major demolition campaign against Palestinian shepherd communities such as Khirbet Humsah, which has been demolished six times so far.

The big picture is this: the state of Israel encourages, with both direct and indirect funding and by refusing to enforce the law, the actions of settlers to evict Palestinians from the rural parts of the West Bank.

All in the name of the apartheid regime that Israel employs throughout the entire region under its control, from the Jordan River to the Mediterranean Sea.

Those who do it sometimes wear armor, sometimes drive spies, and sometimes are outside contractors – violent militias cursed as shepherds.