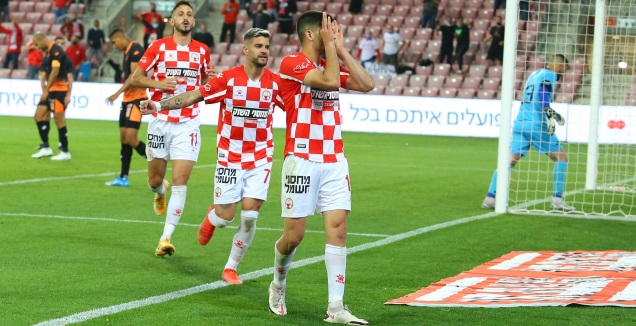 Tomer Yosefi, Score: 7
Beer Sheva’s young midfielder in his best game in the youth team uniform with a great pair of goals and a lot of determination

Matthias Liovic, Score: 4
The Serbian of the Goldens continues to disappoint, missed a great opportunity in a 0-0 situation

Tomer Yosefi saved Hapoel Beer Sheva’s season tonight (Saturday) after raising his team to the top playoffs on his own. The wonderful connection captured a great simple duo and led Roni Levy and his team to 0: 2 over Bnei Yehuda and ex Yossi Aboksis.

The first half was going at a just great pace. Roni Levy’s team dominated from the start, but Bnei Yehuda was the first to risk the goal, when Matthias Liovich missed closely. A few minutes later, Avishai Cohen stopped Sagiv Yehezkel who was last on the way to the goal, but Liani, after a check on VAR decided not to pull red for the orange shield.

Levy and Yosefi after advancing to the top playoffs

BS continued to dominate and in the 32nd minute Sagiv Yehezkel found Tomer Yosefi with a wonderful ball that gave her the lead. Later, Liovich again recorded a huge miss and missed a tremendous opportunity to equalize. Towards the end of the half, Anthony Varen sent a huge missile to Barak Levy’s crossbar and was unable to increase the score.

In the second half the Reds went back a bit and almost paid dearly for it. Bnei Yehuda already managed to equalize in the 59th minute, but Matthias Liovic’s hair was disqualified on the grounds of Patos’ justified dissent in Chirai. After quite a few heartbeats, the great Tomer Yosefi snatched a ball in the box, hit the orange defense and set the result of the game.

Roni Levy and his team finished in fifth place in the table with 37 points and escaped embarrassment at the last minute. The main ambition now in the capital of the Negev is to get the ticket to Europe at the end of the season. On the other hand, Yossi Aboksis’ team continued to get entangled and sink to the bottom while still in last place, with only 22 points and will reach the lower playoffs when they are in a very difficult situation for them.