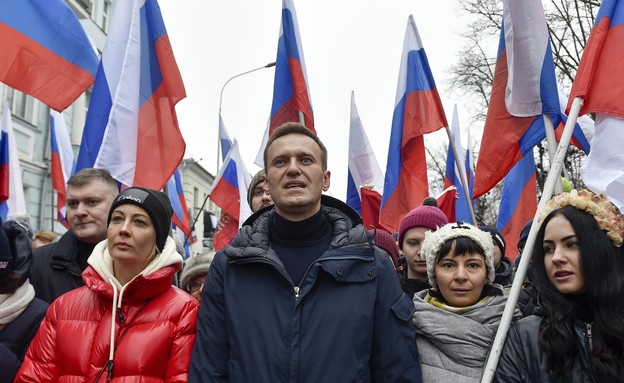 A 33-year-old Russian woman named Maria Pavichek checked in on a flight from Moscow to the city of Siberia on August 13 around 9 a.m., a 4-hour flight away. She was not there alone. Member of the elite unit of the Russian security services, theFSB, Remained in the field that Pavicek had left.

Pavicek, the leader of the anti-corruption campaign of Russian opposition leader Alexei Navalny, was on her way to Siberia ahead of Navalny’s visit there. Opposition leader staff are regularly monitored by the services of theFSB Heir of the KGB, the secret police in the Soviet Union. The agent who followed Pavicek, Oleg Taikin by name, is no ordinary agent; He belongs to a small group inFSB Specializing in toxins and nerve gases.

That morning, several agents from the same unit made their way to Siberia as well, to the same city to which Pavczyk traveled. They arrived there two hours earlier, knowing that Nabalani – a bone in President Putin’s throat for almost a decade – would arrive in the city the next day.

Exactly one week later, Navalny will fight for his life after his body was hit by the nerve gas Novichuk. He crashed during a flight after taking off from Tomsk, the last stop on his trip to Siberia. CNN And the news site Bellingcat, Release new details about the case, exposing the poison unit of FSB, And describe how her people followed Nabalani for at least 3 years. Team of CNN He also spoke with Navalny at his hiding place in Berlin, and heard from him his version of events.

Poison Unit of FSB Located in the suburbs of Moscow. It includes between 6 and 10 agents, including trained doctors, toxin specialists and paramedics. The agents who followed Navalny, all in their 30s and 40s, usually traveled in groups of three, boarding parallel flights as they followed him. Recently they have also started using temporary and interchangeable phones.

In early July, Navalny and his wife Julia spent a short vacation at a hotel in the Kaliningrad region, a Russian province located between Lithuania and Poland on the shores of the Baltic Sea. Flight records found during the investigation revealed that 3 members of the poisoning unit of FSB Fly to Kaliningrad at the same time. The security cameras at the hotel where the couple stayed did not work during their stay.

On July 6, a few hours after theFSB Returning to Moscow, Julia began to feel bad. Navalny toldCNN Because she described a feeling of sudden exhaustion and confusion. Julia eventually recovered, but the source of her illness was not determined. Experts toldCNN That similar symptoms are usually associated with low-level poisoning. In retrospect, Navalny estimated that the symptoms were “completely identical” to those he experienced himself weeks later.

“I could not connect these points. Now I understand how bad it was, what it was, and the terrible feelings she was experiencing at the time.”

Phone searches of people from the poison unit showed that they were staying near the hotel where Nablani and his staff were found on the days when he was poisoned. Navalny does not know how he was poisoned that night the incident took place. He toldCNN “Because he was sitting in a hotel bar around 11 o’clock at night, and tasted like a cocktail” which was really, really bad. I took a few sips and just put it on the table and went back to the room, “he said.

This could be the source of the poisoning. Equally, the source could have been something attached to the laundry that Navalny did at the hotel, or be placed on a towel or pillowcase, or be injected into a shampoo bottle.

“I was poisoned, I’m about to die”

Early the next morning, Navalny boarded a 4-hour flight to Moscow. He drank tea at the airport cafe, and began watching “Rick and Morty,” his favorite series, shortly after takeoff.

After a short time, he began to feel very ill. He went to the bathroom on the plane sweating all over. “I went to the steward and told him ‘I was poisoned, I’m going to die,’ and then I lay down at his feet and prepared to die. You know in that moment that it’s the worst,” Nabalani recalled.

He is still alive thanks to the rapid action of the pilot – who diverted the plane to the city of Omsk and sought medical treatment instead of continuing to Moscow. “They saved my life,” Navalny said. “Thanks to them I got an injection of atropine or another medicine. And I had access to the soul machine.”

When Navalny was lying in a coma in the hospital in Omsk, his staff learned of what had happened. The staff who were still in Tomsk, including Pavicek, tried to keep every possible sight from Navalny’s hotel room: a towel, water bottles or shampoo, a toothbrush.

At that time, warning bells were rung in Moscow. Telephone data indicate intensive communication between senior executives inFSB And two from the unit that followed Navalny.

Despite the risk, Navalny intends to return to Russia soon, subject to approval from his doctors. “I will return, and I will return because I am a Russian politician. I belong to this country. I understand what that entails. I will never give Putin this award.”