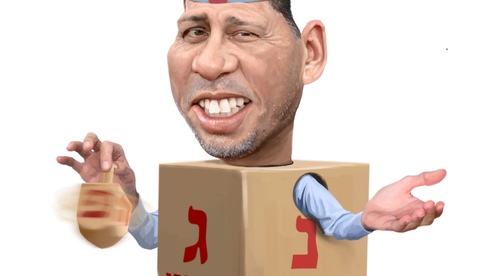 Klinger scribbles and runs away from responsibility

In the ninth round of last season, Hapoel Tel Aviv lost 2: 1 to Maccabi Haifa, a goal in extra time. Coach Nisso Avitan, who scored only seven points in nine games, was fired. And the coach responsible for the professional chaos remains. After every loss he also takes risks, tells of being a “battle learner”, drops the case on the players and receives caresses from his commentator acquaintances. There is nothing like the bronze.

“You know me,” he told them after the loss to Maccabi Haifa. “Short staff, very young players. So what to do, give up? Go? I will not do it.” How exciting and altruistic, and not just towards future generations. “I had a very difficult week,” the coach added, lamenting. “On the one hand a commitment to Moshe, on the other hand a commitment to tens of thousands of fans.” Obviously, one for everyone.

I just wonder why two years ago, when a bid came from Betar Jerusalem, he was not interested in the faltering budget of Hapoel Haifa, nor the orphaned players and fans? After the eighth round he raised his hands, ran away and explained: “Our season opener is poor in terms of points. Mine is not enough. “Standard type.

He also had a zig-zag story at Hapoel Beer-Sheva at the beginning of the decade. “In the difficult situation we are in there are two options, to give up and go or continue. I think I am able to get the team out of the difficult situation,” Klinger announced after a dismal season opener. A week later, he resigned and explained: “One of the problems I and Alona Barkat had was that the goals and resources were not clear.” How lucky that with the Nisnovs, Greenberg and a resident everything is clear.

“We will have a better team next season,” Klinger promised last April, explaining, “Shay Eisen has become a banker in the squad and I look forward to a great future for him. We have excellent youth players.” Today these are damn young.

The climactic moment in the bad movie that Hapoel Tel Aviv is going through is not hard to remember, and it is related to the coach’s ability to put his players in the trap. Before the game against Hapoel Haifa, it was reported, Klinger showed them an excerpt from the movie “Gladiator”, in which the mythological hero Maximus defeats all “I want to see 11 players pressing, 11 maxims,” ​​Hapoel Tel Aviv players reported on the message the mentor conveyed to them, but in the game itself the plot got complicated. Eleven players came on the field, 11 minis, and lost 2: 0.

Speaking of Georgian striker Lev Kotalia, and the attack that has scored three goals in ten rounds, here is what Klinger said before the start of the season: “Kotalia is a good striker and will get in shape. To it? Only those who know Klinger from kindergarten probably know where he learned to throw sand in his eyes.

Guttman gets up and beats the gardener

A few days before flattering Klinger after another loss (“The team is coaching, you know how to coach”), Eli Guttman mowed down the form for Inter coach Antonio Conte. Makes sense. The whole one who coached the Italian national team at Euro 2016, took wholesale titles and broke several records in the Italian league, and also won the championship and cup in the homeland of football. Do you compare that to a commentator from our football empire, who today moves beads on a magnetic board on TV and analyzes the distribution of the Toto revolt?

It happened 0-0 between Inter and Israel’s representative in the Champions League, Shakhtar Donetsk – a game that ended the Italians’ journey in Europe. “I do not understand how Conte does not react … Prisic’s replacement should have been a long time ago … Conte does not need all this link … Conte must understand … he must gamble more … all the offensive tools must Enter now … Conte must bring more technical players into the center of the field. ”

There were, of course, also direct reprimands: “Send more technical players forward! … Play with Varela-style players! … Send four or five more players near Lukaku!” Sometimes the instructions were delivered in a mocking tone. “Very nice, you remember a little too late,” he grinned at one of the expert substitutions, who in his last game as coach of the local Serie A, led Maccabi Haifa to a 3: 1 loss in the derby.

“Oh, what a bad spare,” grumbled Guttman in the 85th minute and scolded the coach at San Siro: “Are you taking out Lautro Martins now?” … For a moment it seemed that Conte was trying to fix the headset, to listen to instructions from the control center in Herzliya.

He does not know the Italian coach, the Middle Eastern chatterbox from kindergarten, but more from the school bench. Guttman recently built an expedited and romantic coaching course called “The Passion in P&C” – Answer Coaching & Passion – and said: “There will be all the knowledge and experience I have gathered from all the years and all the training and symposia with Alex Ferguson, Conte, Blanc, Johan Cruyff, Wenger and Yogi Lev.”

Even in the past, when the Italian led Chelsea to the English Championship, Guttman flew to train with him and Switzerland: “This is a time-out that every coach needs. He allows me to analyze strategies such as Villarreal’s attacking game, or Chelsea’s 3-4-3. With Conte. ” And about six months ago, the trainee and admirer boasted: “I learned from Antonio Conte that the principles of the game are the Holy of Holies, it should not be compromised in life.”

And here today, the cucumber gets up and hits the gardener, so it is not inconceivable that we will soon have a second semester in Guttman’s lecture series: “P&C Provinciality in Training” – Coaching & Provinciality.

Katz is frightened by Shapira’s memory

On Monday, 14.12.20, it was 19 years since the tragic death of Ruby Shapira, who brought Hapoel Haifa the only championship in its history. The Facebook page of the basketball club honored his memory and work, and in the “Red Panel” fan forum, they held a special broadcast featuring the widow Rachel and the team’s players during the peak season, Ofer Talker and Oren Nissim. The football club that commemorates his name was also mentioned, of course, by the longing, and was proud of the youth academy named after the late Shapira.

And only in the group he raised to greatness, nothing. Not even a post on Facebook or the official website. Why? Yesterday, only after the request for a response, they announced: “On Saturday, before the game against Hapoel Kfar Saba, we will mark, as every year, the anniversary of the death of the late Ruby Shapira.” The family, as every year, was not shared. “I am not surprised. , Yoav Katz can not pardon Ruby. Anyone who does not remember the past will not have a future either, “Rachel Shapira told me, who did not even receive an appointment card from the club.

Indeed, as every year, the frightened owner Katz tries to dwarf his predecessor, and does not understand that in doing so he achieves the exact opposite. That is, he glorifies the huge difference between Shapira – the true and humble fan with the total giving ability, and the advertising-loving accountant, who has the infantile way of thinking.

“Three weeks ago, a photo was posted on Hapoel Haifa’s Facebook page of a restaurant in Washington, where Katz was seen alongside Rudy Giuliani – a close adviser to Donald Trump and one of the most ridiculous figures in the United States today.” In honor of Thanksgiving, “plus a news release:” Giuliani told Katz that in his opinion: ‘The US election is not over yet’ “… there is something to look forward to.

Yes, for the current owner of the club it is much more important to rub shoulders with Rudy on Thanksgiving, than to remember and say thank you to Ruby. And since with Shapira he probably never was photographed, we have no choice but to imagine a picture of a little man with a huge shadow.

“I am very happy for the first goals, his name will be praised forever.” Sean Weissman, who scored in the Valladolid uniform on Friday night. I wonder what the Spanish Chief Rabbi says about it.