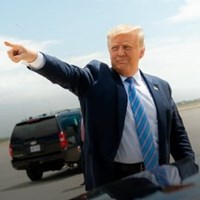 Another facet of Donald Trump’s fascinating personality is revealed in a special three-episode series that will air starting tomorrow on the BBC. According to the testimonies of the personalities closest to him, Trump as president has gone very far. For example, he offered the North Korean dictator a free ride to his home on the presidential plane

Former US President Donald Trump has offered North Korean President Kim Jong Un a free ride home on the presidential plane after their meeting in Vietnam.

In 2019, the two leaders met to negotiate North Korea’s nuclear program. According to a BBC report, although the talks were unsuccessful, “President Trump offered Kim Trump a home on the presidential plane,” said Trump’s top senior expert on Asia at the National Security Council, Matthew Putinger, in an interview with the BBC “Trump Takes the World” .

“The president knew that Kim had arrived on a train that took several days through China, and the president said, ‘I can bring you home in two hours if you want,’ but Kim refused.” Said Putinger.

This was not the first time Trump stunned employees while meeting with Kim. When the two leaders met in Singapore a year earlier, Trump suddenly agreed to Kim’s request to suspend joint military exercises between the US and South Korea.

“Kim Jong Un has complained about the major joint exercises between South Korean and American forces, which have been going on on the Korean Peninsula for about 60 plus years,” former National Security Adviser John Bolton told the BBC program. “Trump, out of nowhere said, ‘I will cancel the war games,’ there is no need for them, they are expensive and it will make you happy. ‘I did not believe it.” Said Bolton.

The remarks were made in the third and final episode of the BBC series, which is scheduled to air on Wednesday, the network said.

It should be noted that Kim Jong Un is afraid of flights for fear of being assassinated and so he moves outside his country only by train to destinations that can be reached by train without the need for air travel, so Trump’s generous offer was not even an option.