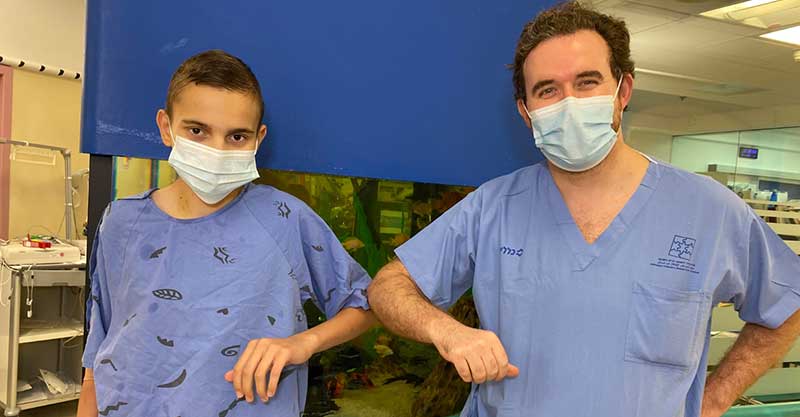 A tumor was found in the boy’s body that interfered with kidney function. A team of experts decided on an operation that has not yet been performed in Israel: a self-kidney transplant

A rare and first-of-its-kind operation in Israel of self-kidney transplantation, recently performed at the Schneider Center for Pediatrics of the Clalit Group. Bassem, a 16-year-old boy, underwent a liver transplant at the age of five due to a metabolic disease. About a year ago, a tumor located in his abdomen and pelvis was diagnosed in his body. The tumor sat on the main blood vessels in the pelvis, which supply blood to the left leg, and in addition completely blocked the urethra between the left kidney and the bladder – something that must insert a regular drain into the kidney for drainage. The drain caused recurrent kidney infections, following which a slave needed frequent hospitalizations.
Because the removal of the tumor is a very complex procedure due to the location of the tumor that sits on many blood vessels and could endanger the blood supply to the left leg, it was decided after consultation with a multidisciplinary team of Schneider Center experts to perform a very rare and complex operation. Which means removing the left kidney and moving it from its natural place to a new place in the right pelvis, where its activity will not be affected by the tumor.
The transplant was performed by the transplant team at the Schneider Center, led by Dr. Michael Gurevitch, director of the Pediatric Liver Transplant and Surgery Unit. The left kidney was separated from the tumor and blood vessels and a section of the urethra located above the tumor were cut off. The kidney was removed from the boy’s body, washed with preservative and later transplanted to its new location on the right side of the pelvis – normal kidney transplantation.
Dr. Michael Gurevitch said: “Self-transplantation of the kidney is an uncommon procedure in the world as well, as it requires two surgeries in one body, both the removal of the organ and the transplant, all in a complicated anatomical environment as in this case. I am happy about the success of the transplant, when the kidney can function normally and the boy does not need a tube to drain the urine that caused the infections. Now that the surgery has been successful, we can begin examining the treatment options for the tumor itself through medication. “
After the operation, the boy was transferred to the intensive care unit at the Schneider Center, headed by Dr. Elchanan Nahum, later transferred to the third ward, headed by Prof. Irit Krause, and about a week after the operation, he was released to his home in good condition. At the Schneider Center for Pediatrics, Bassem continues the chemotherapy treatments in the hemato-oncology system, headed by Prof. Shai Yizraeli.

Want to be updated on all the hot topics in Petah Tikva?