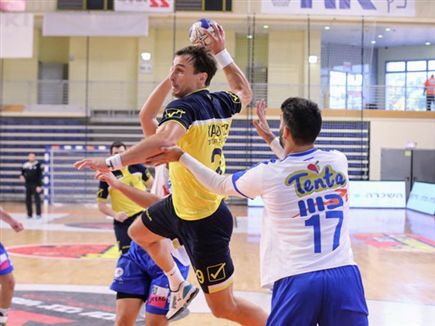 The quarterfinals of the National Handball Cup will be held on Friday. In the draw, which was held tonight (Monday) at the end of the first round meetings at the factory, it was determined that AS Ramat Hasharon will host Maccabi Rishon LeZion (reconstruction of the quarterfinals from last season), Hapoel Ashdod will host Maccabi Tel Aviv, Hapoel Kiryat Ono will host Hapoel Rishon LeZion and Ness Ziona will host Bnei Herzliya. The lottery was conducted by the handball association’s vice president Shai Simon, the chairman of the league and cup committee, Amit Cohen, and the professional director of the association, Rolando Freitas.

As mentioned, five teams qualified tonight for the quarterfinals: Hapoel Kiryat Ono, which defeated MK Beer Sheva 25:41 in the Negev capital (after 23:34 between them last Friday in the league). AK Ness Ziona and Maccabi Dimona provided a much closer game, which ended in a 35:38 victory for the Tigers (brothers Shlomi and Erel Zeitler together provided 16 goals in a division of 11 and 5 respectively). Maccabi Rishon LeZion did not have a hard time against Urbani Rehovot and won 25:33. Maccabi Tel Aviv defeated Maccabi Kiryat Motzkin 26:28, and three days after the league meeting in which Holon won 28:32, Bnei Herzliya provided an excellent game and won in Holon 24:34.

Even before that, three teams qualified automatically – AS Ramat Hasharon, Hapoel Rishon LeZion and Hapoel Ashdod, thanks to their ranking in the top three in the league at the end of the first round. The semi-finals will be held on Monday, April 5 at the Travest Hall in Raanana. the next).