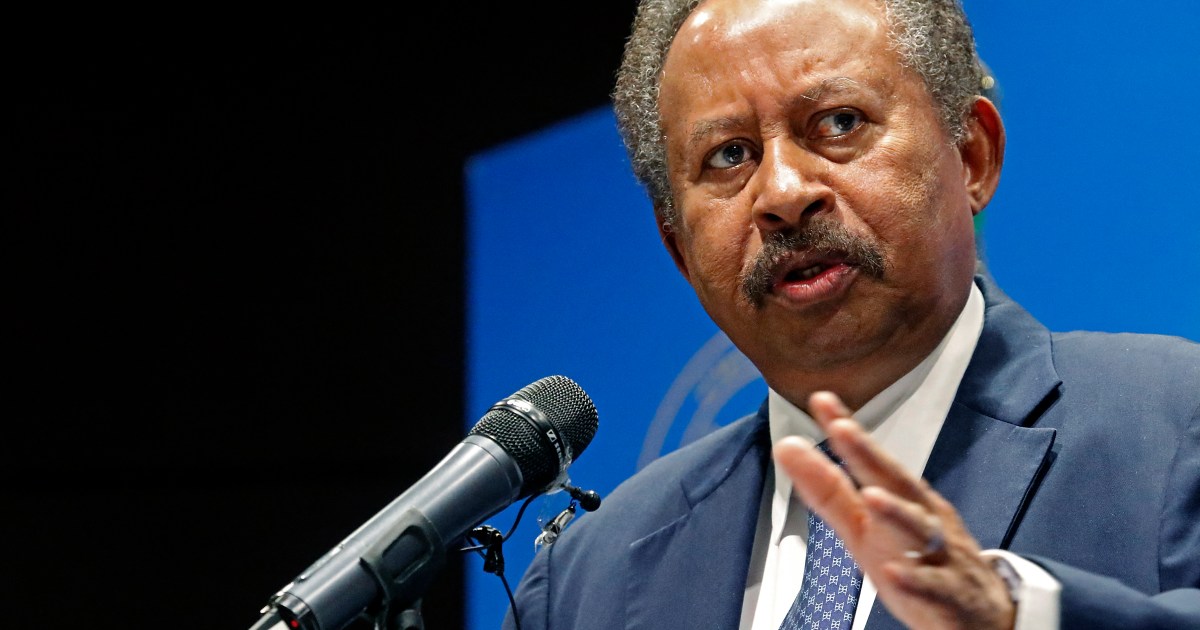 Sudanese Prime Minister Abdalla Hamdok has slammed the country’s military over his major business interests, at a time when tensions are growing within the civil-military transition administration.

Hamdok’s comments came on Monday a day after the United States removed Sudan from the list of “terrorist” state supporters, a designation that blocked, among others, the country’s access to international financial networks.

“Every army in the world invests in defense companies,” said Hamdok, a trained economist who has served in major international institutions.

“But it is impossible for these military and / or security services to do so in product sectors, thus competing with the private sector,” the 64-year-old continued, as he focused on powerful military interests. in sectors from mining to agriculture.

Sudan has been run by a sovereign council, a civilian-armed group founded in August 2019, months after the dismantling of Omar al-Bashir’s long-range military arrest after major protests against its rule and economic loopholes continuous.

The council, made up of six civilian figures and five armies, is Sudan’s highest executive authority and is tasked with leading the country to free and fair multiple elections in 2022. .

Hamdok, who is responsible for his day-to-day running of the transition government, was answering a question on a U.S. bill aimed at promoting civilian control over finance and related assets to Sudanese security forces.

This law will help “the transition government to promote democratic transformation,” Hamdok said.

According to reports in Sudan, the military and security services control 250 companies in vital areas such as gold, rubber, meat exports, flour and sesame.

They are tax-free and will work at full capacity, according to reports, as the country struggles with a deepening economic crisis.

The leader of the Swedish Council, the army general Abdel Fattah al-Burhan, has refused to transfer the companies to the government, saying he is only willing to make them pay tax.

Earlier this year, Hamdok criticized “only 18 per cent of state resources are in government hands”. He promised that it would be a “priority” to bring companies belonging to the security sector back to government.

Joseph Siegle, director of research at the Center for Strategic Studies of Africa, said Hamdok’s public statement signed with security leaders that the need for security reform continues, even after the assignment of State Trustees (SST) recently removed.

“With the construction of SST, some security actors may feel less inclined to move forward with the democratic movement, preferring to maintain the status quo,” he told Al Jazeera.

Siegle said the military move is important for a number of reasons or economic reasons, including creating more space for a competitive private sector to grow, boosting productivity and generating jobs. is badly needed.

“Military movement is also important for security,” he said. “Governing outside economic interests removes security actors from their primary duty, which is to provide security for citizens. It also contributes to a flourishing army and heavy leadership that is unwilling to retire. Finally, a military move is essential to make a true democratic movement possible.

“By controlling their own sources of revenue outside state control, security leaders will not be as accountable as elected civilian leadership to their financial interests. This fosters political instability. “

Suliman Baldo, a senior policy adviser at the Sentry, a non-profit organization that aims to prevent racism and crime in East and Central Africa, told Al Jazeera that members of the civilian government had tried to engage in “silent diplomacy” to persuade the military. to waive some of his inalienable rights but not to take advantage.

“The building of Sudan’s designation as a country in support of terrorism would strengthen the hand of the prime minister and the civilian role in putting pressure on the military and security base to end their financial independence and taking control of the establishment and their physical activities, “Baldo said.

Burhan had announced in early December that a new body would be formed, the Council of Transition Partners, which led to a rift with Hamdok’s civilian government.

The group would be “responsible for managing the transition period, resolving differences [between those in power] and to have all the necessary options to use its power ”, according to SUNA news agency Sudan.

The government responded by saying that al-Burhan had exceeded its options by giving too many powers to the new body.