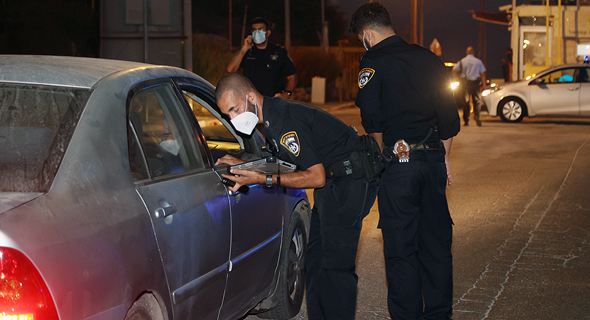 Two days before the start of the festivities, government ministers this evening (Tuesday) approved the imposition of the night curfew from Thursday to Sunday from 05:00 to 20:30. Culture Minister Hili Troper abstained from voting following a confrontation with Netanyahu over holding performances during the closure. The decision to open the education system was postponed to next week.

The meeting was initially scheduled for 5:30 p.m., but was constantly postponed to a later time so that Prime Minister Benjamin Netanyahu would arrive at the Khan Theater in Jerusalem and watch an excerpt from a play that will air tonight. When asked by one of the actresses why he did not stay to see the whole play, he replied that he was on his way to a “different play” called the cabinet meeting: “Comedy, drama. All together. An interesting play,” said Netanyahu, who claimed not to visit the Jerusalem theater for fifty years. Netanyahu finally left the scene without seeing the play.

The Ministry of Health tonight demanded the return of the isolation hotels that were canceled by the Constitution Committee yesterday, and to reduce public transportation by 50% during the holidays – and to stop long-distance activity as early as 20:00. “The regulations will be like the previous closure,” Projector Ash said. “A limit of one kilometer from home and a ban on staying in another’s home.” According to the ministry’s data, 1,701 corona patients arrived in Israel in December and January – causing the infection of 4,384 Israelis. It also emerged that 80% of corona cases in the country were caused by the British mutation. Between 2% -1% are from the South African mutation.

Netanyahu said at the beginning of the meeting that “we do not want it to be like the previous Purim and I am sure we can prevent it. There are various requests to discuss the opening of education, we will start discussing it today and continue to discuss it on Monday. We will make an informed decision.” Still in competition with the virus and with the raging mutation. For this we need to get through the next few days as we vaccinate the at-risk population and complete the vaccination campaign. Therefore, I will enter the government tonight and we will make decisions to prevent what happened last Purim, we do not want it to happen again. himself”.

Superintendent Amnon Alkalay, head of the police operations division, said he anticipated major incidents and violations in Jerusalem despite the curfew. Netanyahu asked him since when he thinks the curfew should be imposed in order to prevent the rallies, and Alkalay replied that in his opinion the arrival and transportation to Jerusalem should be completely prevented or minimized in the coming days.

Contrary to the position of the Minister of Health, Defense Minister Bnei Gantz is going to pressure the ministers to open the education system in the green and yellow cities so that seventh- through tenth-grade students can also reach the schools in a half-grade format. In blue and white, Education Minister Yoav Galant is also expected to demand a discussion with teachers’ organizations on returning school days in the summer.

“I think we need to tighten the limits that are imposed on us on Purim,” Ganz said. “Maybe on Purim there will be a closure, but on Pesach there will be order, large gatherings should be avoided.” Ganz thanked Deri for agreeing to open the Taba crossing to Israelis who remained in Sinai.

The corona projector told ministers that the rate of positives is declining over time and the number of deaths has also dropped by 30% -25%. He noted that according to forecasts, in about a week the number of critically ill patients will stand at about 600 people. At noon, Ash called on the ultra-Orthodox public to maintain restraint during the holiday so that families can celebrate Pesach together. In a briefing to the media, Ash said he was calling on the ultra-Orthodox leadership to prevent the rise in morbidity, and admitted that he feared that Purim would become the focus of an outbreak that would lead to a fourth wave.

Ministers began to offer their ideas. Tourism Minister Orit Farkash HaCohen said she supports Purim restrictions, but believes the Green Islands must continue to maintain the hotels. Welfare Minister Itzik Shmuli proposed delaying the start of the night curfew to 22:00 to earn another two hours for business owners, and that the parties start relatively late. Minister Ophir Akunis wanted to clarify that nature parties would also be prohibited under the regulations. Secretary of State Tzachi Braverman was angry at the ministers’ outbursts and said: “Ahead of Purim, which is upon us for good, I suggest that the ministers dress up as first graders, so that the discussion will be as quiet as it is in first grade.”

Netanyahu went on to say that following a conversation with the CEO of the pharmaceutical company Pfizer Israel, it will purchase millions of vaccines, assuming that citizens will have to be vaccinated twice a year. “Starting in another six months, we are preparing to vaccinate the entire Israeli population, including children. Pfizer said they are working on childhood vaccines and results should arrive in April-May. “Accordingly, if it is possible to vaccinate children according to the protocol,” he said.

Culture Minister Hili Trooper opposed the curfew on cultural performances – in part because of Netanyahu’s arrival at the Khan Theater on the evening he planned to arrive with President Rivlin. “We have postponed or postponed most of the shows, there remains a very small number of shows, at the level of individuals, and with the approval of the director general of the Ministry of Health,” he claimed. “It is explicitly mentioned that people on the way to shows will present tickets to police officers.”

The prime minister raised his voice and said: “I strongly oppose. Give them the compensation, what thought is this at all? The world of culture will collapse if they postpone two shows? If Ben Gurion Airport is closed and we know how to make closures, will we make performances? It is impossible to break the minimum discipline that should be in the days of closure. You create a problem for the whole public. “Ganz intervened and said:” Let’s move on, we will make sure to compensate them. “