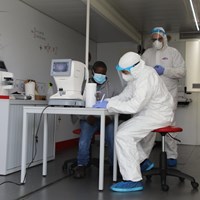 After many reports that the corona virus can damage the hearing system as part of the ‘post corona’ symptoms, a new study contradicts the reports and states that an examination, no evidence of damage to the hearing system was found.

Since the outbreak of corona there have been quite a few reports in the professional literature that corona virus may cause hearing loss in patients and recovering patients, but a new study contradicts the reports and states that examining the quality of hearing in corona patients – found no evidence of hearing damage.

Prof. Avraham explains that “it was clear from the outbreak of the plague that the disease had long-term effects, such as loss of sense of taste. The question was whether the reported symptoms were caused by the disease itself, ie whether the disease also leads to damage to the hearing system, or whether it is a temporary hearing impairment due to fluid in the middle ear and a feeling of opacity in the ears as often happens with colds.

Dr. Dror adds that “in our study we examined whether the corona could cause permanent nerve or sensory damage and found no evidence of such damage. To investigate the phenomenon quantitatively and objectively, we did not content ourselves with the subjects’ reports, but used electrical recordings from the brain stem to examine the entire path of the sound waves in the ear – from the moment an acoustic stimulus enters the ear canal, damages the eardrum, shakes the auditory bones and progresses into the cochlea. For the absorption of electric waves in the brain. In addition, we examined the activity of the outer hair cells, which amplify and direct the sound, and we found no difference between the corona adhesives and the control group. “