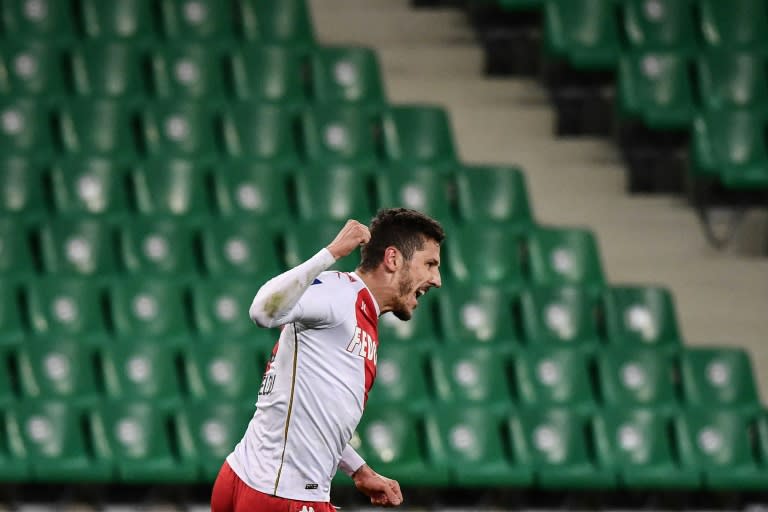 Monaco renewed their title hopes, moving to within four points of Ligue 1 leaders after their 4-0 win at Saint-Etienne on Friday.

Stevan Jovetic’s first-half strike was followed by a second-half goal from Aurelien Tchouameni, Sofiane Diop and Krepin Diatta that shut out a comfortable win for Niko Kovac’s men who had just taken a point from their last two league rounds.

Monaco remain fourth in the table, just one point behind second-placed Paris Saint-Germain and third-placed Lyon who meet on Sunday.

“We have to continue like this. We have to secure fourth place. The positions are clear,” Monaco coach Kovac said.

“We’re back to one point from Lyon and PSG but I don’t want to look any further than that. But it will be difficult to get past Lyon, Paris and Lille who are very strong teams.”

The result is another blow for Saint-Etienne who are down in 16th, six clear points from the relegation replay spot.

Montenegrin striker Jovetic caused problems from the start, hitting the crossbar before getting the chance to open the scoring from the penalty spot on 12 minutes.

His strike, however, came again off the woodwork, this time the left post.

A moment later, however, he collected a pass from Tchouameni, passed the gamekeeper and slid the ball in for the opener.

Monaco took control of the rest of the half but added no more goals.

The pressure, however, in the second half revealed how Tchouameni scored a second in the 54th minute.

Diop extended the lead with his seventh goal of the season in the 63rd minute before Diatta ruled out the win 12 minutes later.