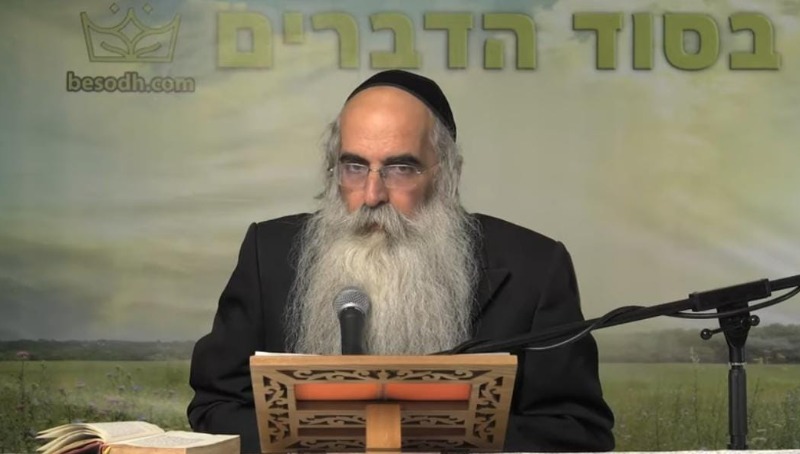 Following Rabbi Yuval HaCohen Asherov’s remarks on the Corona virus and against the vaccines against it, the Advisory Committee for the Examination of Public Misleading in Advertising at the Ministry of Health, issued an unusual announcement this morning. “Those who act according to his publications may avoid protective behavior and reduce infection, in violation of the legal emergency regulations and the recommendations of the Ministry of Health and the accumulated professional knowledge, And endanger themselves and their families, those around them and the public. In this way, his publications constitute dangerous and misleading public health and private health. “

The Ministry of Health says that Rabbi Asherov does not hold a license to practice medicine or any health profession – not even in physiotherapy, despite other media reports. “The misleading information provided by him or his publications may not guide the public in dealing with the corona virus or be construed as a recommendation or instruction of medical value.”

Rabbi Asherov: “Do not ask me more about corona and vaccines”

“In his publications,” the committee wrote, “Rabbi Asherov purports to advise the public, directly and implicitly, on the nature of the corona plague that is affecting the whole world, while misleading information about its morbidity, while in Israel and around the world a plague occurs at any given moment, at all ages. “And even in healthy people. All over the world and in Israel, specialist doctors with the medical background suitable for treating epidemics – study the epidemic, and are constantly updated on its upheavals, and its rapid progress over the past year.”

“This, along with many doctors and nursing and mental health professionals who fight the epidemic on a daily basis in community settings and inpatient wards, trying to prevent death or irreversible damage to its patients – adults and children, healthy and chronically ill, women and men.”

The committee says that “Even those who recover from the disease often remain in a degree of damage that requires prolonged physical, respiratory and mental rehabilitation. This is when there is still a great deal hidden about the visible in this disease, regarding the future consequences and the damage in the long term – similar to infection with other viruses such as hepatitis C, hepatitis B, herpes, AIDS and more. “

According to them, Rabbi Asherov ignores the professional knowledge “constantly updated all over the world, the testimonies of the staff and families who saw their loved ones dying before their eyes, and of the people who fell ill and managed to get out of the difficult stage and rehabilitate their physical and mental condition.” More, and even misleads and irresponsibly endangers his listeners. “

“The public is not made up of one piece, and is made up of many people with different demographic and morbidity characteristics – the elderly, pregnant women, people with vaccines or drugs that suppress vaccines in the first place, oncological diseases in various stages of morbidity and treatment, depression and anxiety and stress, and those in danger. Infection is as high as boarding schools, nursing homes, treatment facilities, etc. All of these, and many others, His words are heard and he is trusted to be presented as “great and knowledgeable” – when his statements have no up-to-date factual basis or professional basis. “

The committee quoted Rabbi Asherov as serious: “This monster called Corona is nothing more than a normal flu.”, “Most of those who carry the virus are not sick,” Too much, it will pass alone “,” the body knows how to vaccinate itself and overcome things alone “,” this is not a plague “,” corona does not make disease what kills is toxicity “.

Finally, they wrote that Rabbi Asherov HaCohen claims to understand and recommend how to prevent infection with the virus and calls for avoiding vaccines despite the harm and danger of disease, “despite evidence of the effectiveness of vaccines in reducing morbidity. Evidence is frequently collected, studied and reviewed by competent authorities In recent weeks – when tens of millions of people have been vaccinated, including millions of people in Israel. “