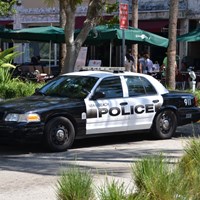 US anti-Semitism: Man arrested after shouting antisemitic threats at Jewish families at an ice cream shop in Miami Beach | He was later arrested and two knives were found in his possession

According to the arrest report, Collins turned to a man and his family in the area of ​​Lincoln Street and Michigan Boulevard on Sunday and for no apparent reason shouted at him “I’m going to kill you, you damn Jew” and added a few more words that should not be transcribed.

The man and his family, including a 12-year-old boy, quickly fled the scene and entered an ice cream shop to get away from Collins. But Collins entered the store, which had a large number of Jewish families inside, and began shouting that he was “going to kill all the Jews” and told them “your time has come.”

Collins left before police arrived but was later found and arrested. When officers searched his backpack, they found two knives.

The report said Collins continued to make antisemitic statements while in custody at the police station. Collins, who was registered at a Kentucky address, remained in custody. Police said the case was being handled by the Hate Crimes Unit.