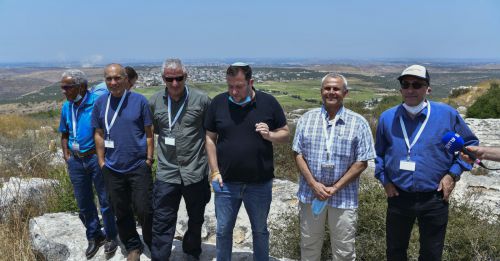 Chiefs of Security in a Tour of Samaria with Yossi Dagan, Archive (Credit: Meir Elifor)

The leaders of the security movement, Maj. Gen. Yitzhak Jerry Gershon, Gershon HaCohen, Danny Bitton, and other IDF officers today (Thursday) opposed Minister Bnei Gantz’s statement that there is a place for a Palestinian capital in Jerusalem, calling on him to resign immediately or return. From his words.

In the position of the security movement, “Minister Gantz’s statements are in complete conflict with Israel’s security principles and have the potential for enormous security damage.”

“Confused”: On the right, Gantz’s statement is attacked

“Any sane person who understands security knows that in any future political settlement, the Jordan Valley in the broadest sense (as the late Rabin said) will remain in the hands of Israel and its sovereignty. There is no such thing as “controlling individual strategic points”! “In order to protect Israel from what may come from the east of the Jordan River, Israel must control the entire valley, from plants in the north to Eilat in the south, and in the entire area above it.”

It was also stated that in his statements, Minister Ganz gives up the most basic principle on which the State of Israel was established – our ability to defend ourselves on our own, instead he calls for “security guarantees”, ie: someone else “to guarantee our security”.

“Moreover, in his remarks on Jerusalem, Minister Gantz sold the principle held by both the Zionist left and the right for many years – a united Jerusalem. Minister Gantz – your words put Israel in security danger, withdraw your words or resign.”

Earlier today, Defense Minister Bnei Gantz gave an interview to the Saudi newspaper Al-Sharq Al-Awsat, distributed in the Arab world, in which he first addressed in detail his doctrine on the Israeli-Palestinian conflict. Gantz emphasized that he did not see peace in the Middle East without a solution. To the conflict with the Palestinians.

Will the Knesset be dispersed? | PM Netanyahu: Blue and white are trailing behind Lapid and Bennett

Ganz also revealed for the first time his position on the future of Jerusalem and said: “Jerusalem should remain united, but there will be room for a Palestinian capital. It is a very wide city and full of holy places for everyone.”

Asked if he meant a state, Ganz said: “A state or an empire, to be called as they wish. Their right to feel independence and to have a beer and a solution to all issues. We must speak in a new and contemporary language about ways to solve and not cling to traditional discourse.”

Ganz emphasized that Israel would not return to the 1967 borders, but that there could be an exchange of territories with the Palestinians. “You know that we opposed the annexation plan from the beginning, before the UAE demand was raised and before Netanyahu agreed to a freeze. We opposed the training of outposts. We want to expand the Palestinian entity geographically, to allow it to live a comfortable life without obstacles,” Ganz said.

“What we are constantly asking for is security. We need real strategic barriers to security. Of course, we can talk about land swaps, although I do not see how and where. We say the 1967 borders will not return. But there is always the possibility of finding compromises,” Gantz added.