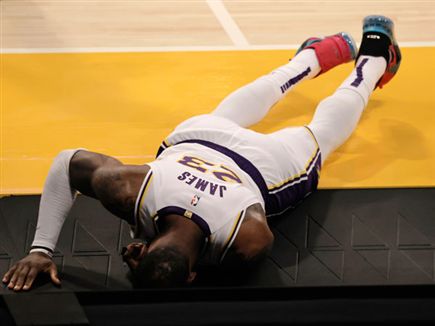 After being injured and stressing out the entire NBA world, the fog surrounding LeBron James’ injury is slowly being removed. Today (Monday), Adrian Wojnerowski of ESPN provided new clarifications regarding the Lakers star, who would not have done so well without him against Phoenix.

As you may recall, the “King” injured his ankle during the loss to Atlanta – and after attempts to return to the floor, went down as he stepped into the locker room. Later, when he did an MRI scan, it became clear the severity of the injury could have disabled him for up to 10 weeks. Now, according to Vogue, LeBron could be out for 3-4 weeks.

“The Lakers are still assessing the severity of the injury,” the senior reporter claimed. “But they are preparing for the possibility that they could be without LeBron for three weeks to a month. It is a normal time frame for this type of injury, but the timeline is still evolving. James has shown in his career a quick recovery time from injury to injury, but this time it will not be that easy. We are preparing for the possibility that it will be weeks and not days. ”