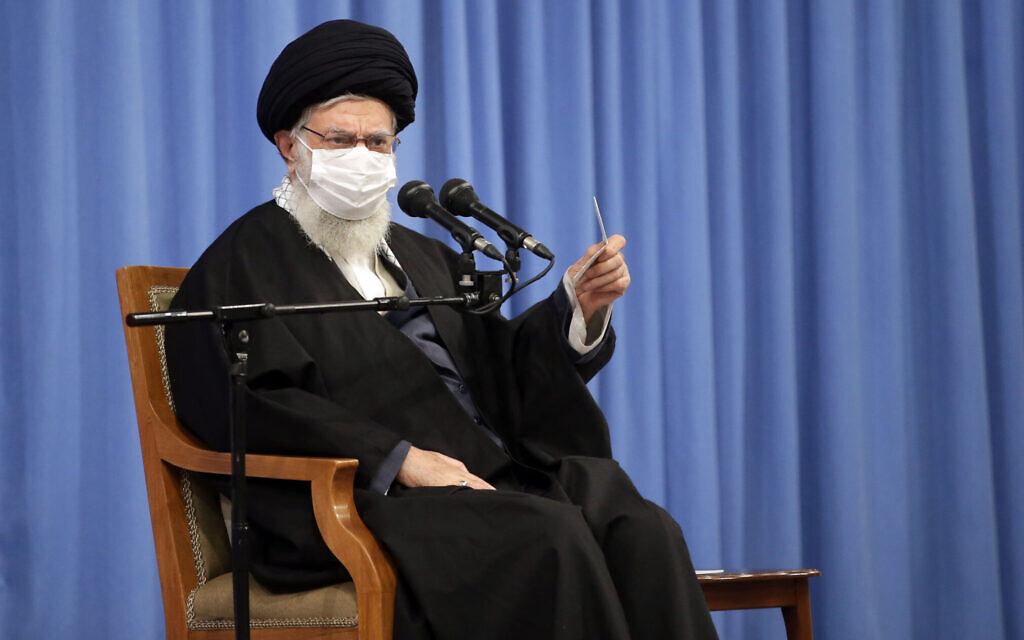 Iran’s Director General Ayatollah Ali Khamenei appeared in public on Wednesday, dismissing rumors of a serious deterioration in his health.

Khamenei spoke in Tehran at the congregation hall of Imam Khomeini, where he attended a meeting with the family of Revolutionary Guards Gen. Qassem Soleimani, who was killed in January in a U.S. drone strike, and top military leaders. They all sat about 5 meters (16 feet) away from the 81-year-old Khamenei, who was wearing a face mask because of the still-spreading coronavirus infection in Iran.

A video released by Khamenei’s office showed him walking from behind a curtain to the chair and greeting the family, as well as Hossein Salami of the Revolutionary Guards and parliament spokesman Mohammad Bagher Ghalibaf, among others other officers.

Last week, an Iranian official denied rumors that Khamenei had a sudden decline in health, or even death.

State TV also denied reports before a meeting of the Assembly of Experts on Leadership, a group of 88-elected clergy with responsibility for recruiting and overseeing the director general.

Meet the family of Martyr General Soleimani as well as the organizers of the memorial for the 1st anniversary of the priests of Haj Qasem Soleimani and Abu Mahdi al-Muhandis pic.twitter.com/wvdXxzclrA

Rumors about Khamenei were sparked after an Iranian journalist from London, Momahad Ahwaze, tweeted that the general’s health was deteriorating and that “those close to him were terrified.”

There have been false claims in the past about Khamenei’s death.

By Wednesday, Khamenei ‘s last public appearance had taken place on November 24, when he met with top Iranian officials, with videos of the meetings broadcast by state television.

He was successfully diagnosed with prostate cancer in 2014.