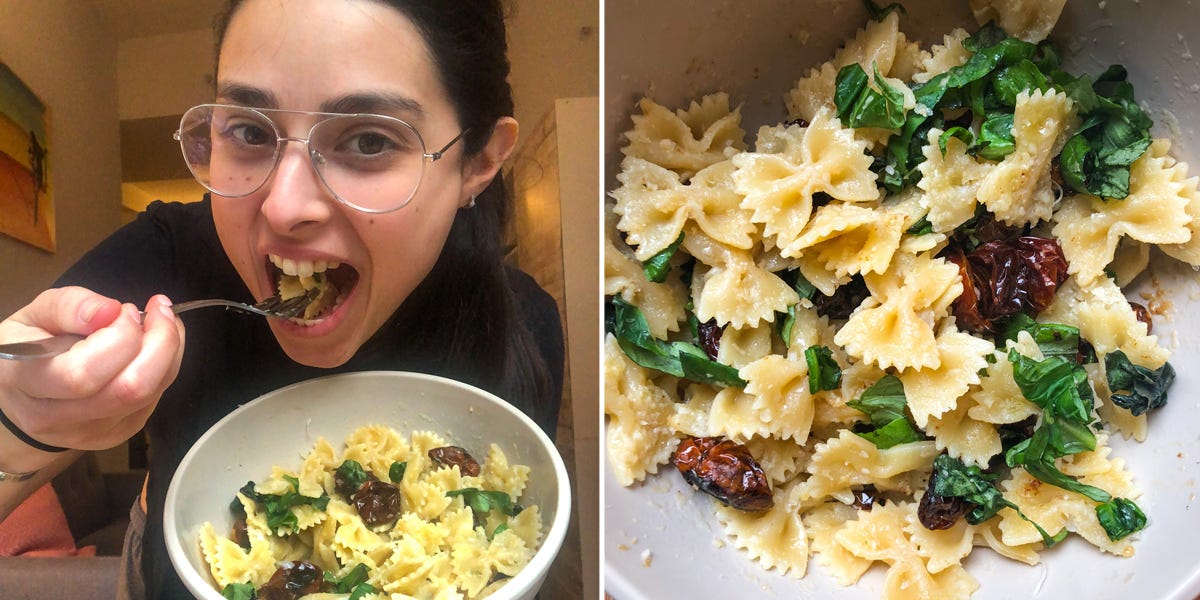 In the first episode of “Waffles + Mochi,” the new children’s show made by Michelle and Barack Obama on Netflix, author of Samin Nosrat award-winning cookbooks shows the signature characters how to make pasta with tomato candy. “

It is a simple dish made with short pasta, fresh basil, Parmigiano Reggiano, and tomato cooked until they taste like candy, according to the guest “Salt, Fat, Acid, Heat”.

Since I pursue simplicity and freshness when it comes to pasta dishes, I thought this looked like something I needed to try for myself. Nosrat’s recipe was incorporated into production notes shared by Insider with the “Waffles + Mochi” team.

I walked into the store with a short list of just six ingredients. Nosrat’s recipe calls for short pasta (of any kind), fresh basil, cherry tomato, cheese for grating, and sugar.

Looking at the many types of pasta on the shelf, I went with a farfalle – a personal favorite that will always take me back to my childhood.

I also chose to stick to Nosrat de Parmigiano Reggiano’s recommendation for the cheese, although her recipe allows home cooks to choose another one like Asiago, Pecorino Romano, ricotta salata, feta, or ricotta.

I made a mistake reading the recipe because I cooked it instead of reading through it before I started. To my surprise, the Nosrat method is needed five hours to turn the tomatoes into “candy.”

Since I started cooking at 3pm, what I thought would be a late lunch has been turned into a very late dinner. But despite the long cooking time, the process itself is quite simple. After tossing the tomatoes in olive oil, salt, and sugar, I put them straight into the oven and said goodbye until 8pm.

When they were finally made, I was reminded that patience really pays off. The tomatoes were somewhat sour and bitter, and made the glands in the back of my panic. They are sticky in some places and sprayed with juice in others.

While I enjoyed them all, I think I should have pulled some out faster than others – some shrunk to the point of drying out and lost the pleasant juice. The dried tomatoes were mostly sour while the others came through in the soft pieces.

The taste of the tomatoes was sun-dried, but the texture of roasted ones.

Once the tomatoes are cooked, the rest of the preparation is seedless – and quick.

I cooked the pasta in very salty water (I put a little more than one tablespoon in my quarter-sized pot) according to Nosrat’s instructions, grated a lot of cheese, and tore a handful of fresh basil leaves.

Nosrat recommends mixing cheese, tomato, and olive oil into the pasta before adding the basil. I found that this helps keep the herb fresh instead of sprinkling under the heat of just cooked pasta.

I added more cheese at first than I thought I needed (use your judgment, folks!) And I still had to add more. I had only drained my pasta for a short time so that a small amount of the starchy cooking water was left when I put it in a bowl. This helped the cheese stick to all the backs and crannies of each bow-tie noodle. It was beautiful.

I took my first bite just after wrapping in the torn basil leaves. It was fresh, bright, light and very salty. The feather-like cheese would not measure this dish down in the same way that melted mozzarella does. Explosions of intense flavor from the tomatoes were beautifully balanced by the refreshment and fragrance of the basil leaves.

If you are going to prepare a batch of this dish, I recommend leaving basil out until you are ready to serve each serving.

I also recommend making a large batch of tomato candy, no matter how much pasta serving you are cooking.

To preserve the tomato candy, Nosrat recommends putting them in a jar and covering them with olive oil – that way, she says, they stay well in the refrigerator for up to six weeks. The freezer is also an option: Freeze the candy first in one layer on a baking sheet, transfer to a freezer bag once frozen, and keep for up to six months.

And the tomato candy is perfect for adding to more than just this one pasta dish. I will definitely be adding these to salads, chicken dishes, and even hors d’oeuvre tables from now on.