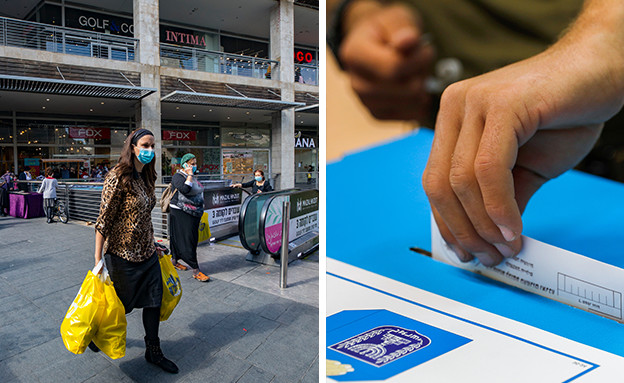 Israeli citizens will arrive this morning (Tuesday) at the polling stations near their homes, and will vote for the fourth time in the last two years for their favorite party. Recent polls suggest that the right-wing bloc is strengthening and Netanyahu is on the verge of gaining the 61 seats needed to form a government, but there are other variables that could affect the final results. N12 commentators analyzed the situation yesterday and presented the factors that have the power to decide the election.

This is perhaps the big question of the election. The corona may shuffle the cards and it raises some questions. Will the isolated and the sick make the effort, and reach the designated polling stations? Will there be confusion around finding polling places? These are important issues that will affect the turnout.

In addition, anger among some members of the public over the way the government handled the crisis may encourage more voters to go to the polls, and in the same breath also dissuade them from doing so. On the one hand, vaccinations and the gradual return to routine may push Israelis to the polls, and on the other hand, the high unemployment rate may evoke feelings of indifference and anger. In any case, Corona has great potential to influence the vote.

At the same time, it is important to remember that this is the fourth round in two years. The public is tired, and it seems that parts of it believe that a decision will not be reached this time either. This has a critical impact on the voting rate, as a person who does not believe in his or her ability to influence may waive his or her right to vote. However, the turnout rose in each of the previous rounds, despite forecasts that Israelis would not flock to the polls. It is possible that this time too she was deceived, and the Israelis will actually vote en masse in an attempt to reach a decision.

Devout sports fans tend to look at the top of the table and the top teams. Who reached the final? Who’s in the playoffs? Who are the stars? These are the interesting questions. However, tomorrow evening it will be the small parties that will attract the most attention.

According to the latest polls, 4 small parties are swinging and may not pass the blocking percentage: Meretz, RAAM, Blue and White and religious Zionism. The fall of one or more parties could prevent the formation of a government, and the consequences are more severe Belong to him.

Voting rates are of great importance here, as this will require more votes for each seat. A party that finds it difficult to pass the blocking percentage will have even more difficulty. If the turnout is low, the small parties will benefit, especially in the left bloc.

Until the final results are announced, the mood in which each of the camps will arrive is the interesting factor to look at. In every campaign, the constant dilemma of the parties arises: to arouse a good mood and optimism among the voters, or rather to create an atmosphere of pressure and urgency? The first may cause apathy, and the second may discourage voters.

It seems that this time, and contrary to his character, Netanyahu is running a positive campaign, “back to smiling.” He assures his supporters that this time it is possible to win, that it is within reach. On the left, however, there are dilemmas, and the camp comes in a humble mood that can be devastating. Many are undecided: some think that a decision will not be reached this time, others believe that Netanyahu will win and another part in general is undecided whether to vote for Lapid, or rather Saar or Bennett. This is a problematic mood, which can be even more problematic on election day.