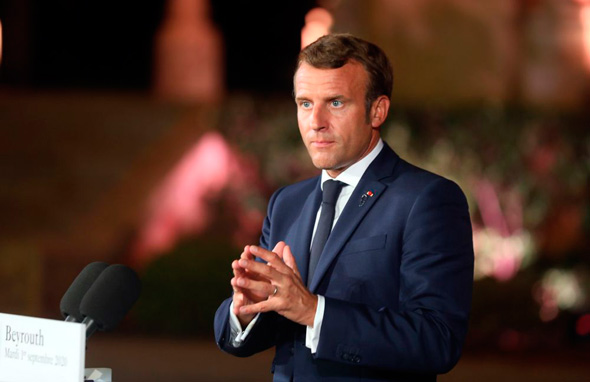 French President Emmanuel Macron is infected in Corona. This was reported this morning (Thursday) by the Elysee Palace. The announcement this morning comes in the shadow of the renewed jump in morbidity in the country. Last night, the health authorities in France reported a jump in the number of diagnoses per day – 17,615 new cases compared to 11,532 the day before.

This is the highest increase since November 21, which came just a day after France replaced the general closure with a night curfew. The Ministry of Health also reported 289 deaths in hospitals, compared to 307 the day before.

Hospitals in Tokyo are finding it difficult to provide routine care due to a sharp rise in the number of corona patients. Officials warned. In Tokyo, 822 new infections were diagnosed today – a new record after 600 diagnoses a day so far. Japan has so far refrained from imposing a closure and experienced a moderate eruption of the corona. To date, about 190,000 people have been infected with the virus and 2,700 have died from the disease.

09:27 – Saudi Arabia: The economic contraction moderated in the third quarter

The Saudi economy contracted at a slower pace in the third quarter compared to the previous quarter, following easing of corona constraints. However, the oil sector affected by the crisis continues to weigh heavily on the Saudi economy. The economy contracted in the third quarter by 4.6%, compared with 7% in the second quarter.

The world’s largest oil exporter announced on Tuesday that it expects the economy to shrink by 3.7% this year, but return to growth of 3.2% next year.

“This negative growth was mainly due to the contraction of the oil industry at 8.2% and a negative growth rate of 2.1% recorded in the non-oil industry,” the General Statistics Authority said this morning regarding third quarter data.

South Korea reported a record number of dead bodies from Corona. The Agency for Disease Control and Prevention reported this morning that there were 22 midnight deaths, compared to the previous record of 13 earlier this week. In all, the state reported 1,014 new infections, including a daily record of 423 in the crowded capital city of Seoul.

Authorities in Germany reported that in the past day, 26,923 people had been diagnosed with Corona, and 698 had died as a result of the virus’ complications. Yesterday, Germany announced that the vaccination campaign against the virus will begin on December 27, when the first to receive the vaccines from Pfizer and BioNTech will be elderly people in nursing homes. At the outbreak of the plague, 1,406,161 people in Germany were infected in Corona, of whom 24,125 died.

7:00 – A quarter of a million are infected in the US every day, Biden will be vaccinated next week

Joe Biden is expected to be vaccinated against Corona next week. This was announced tonight (Thursday) by officials in the transition team of the president-elect, while the US authorities are trying to convince the public that the vaccine is safe to use. At the same time, the White House announced that outgoing Vice President Mike Pence will be vaccinated this weekend.

Biden and Lantern will be publicly vaccinated in order to set an example for citizens and increase public safety in vaccine safety. The White House said along with the flashlight, his wife Karen and the head of the federal health service, Dr. Jerome Adams, will also be vaccinated. Meanwhile, the plague continues to hit the United States. In the last day, more than 3,700 people have died from the virus and another 250,000 people have been diagnosed. This is according to data from Johns Hopkins University. 113,069 Corona patients are hospitalized, the highest number of hospitalized since the outbreak. This is the 15th day in a row that the number of patients is higher than 100,000 people.

On Tuesday, Biden said that the administration’s infectious disease specialist, Dr. Anthony Pauchi, recommended that he be vaccinated as soon as possible. “But I also note the importance of getting himself vaccinated in public.” I want to make sure we demonstrate to the American people that it is safe to get vaccinated, “Biden said.

The President of the United States will be vaccinated this week Photo: Getty Images

This week the U.S. began vaccinating medical staff, residents and nursing home workers and some government officials. U.S. government officials aim to get another 2.9 million doses of Pfizer’s vaccine by the end of the week. The vaccine is expected to be available to the general public in the U.S. next year.

More than 304,000 Americans died from the outbreak of the plague and about 16.7 million people were infected with the virus – about 5% of the population. On Tuesday, White House spokeswoman Kylie McNanny announced that outgoing President Donald Trump will be vaccinated whenever his doctors decide the timing is right.

In Brazil, the Ministry of Health announced tonight that more than 70,000 new infections in Corona have been diagnosed in a day – the highest daily number of infections since the outbreak. This brought the total number of infected people in the country to more than seven million.

The record was recorded without data from the most populous province of Sao Paulo, where morbidity is particularly high. Authorities in Sao Paulo said they did not provide their data due to technical issues. The Brazilian Ministry of Health also said that more than 900 corona patients died yesterday. More than 180,000 people have died in the outbreak in Brazil.

France also reported a jump last night in the number of diagnoses per day – 17,615 new cases compared to 11,532 the day before. This is the highest increase since November 21, which came just a day after France replaced the general closure with a night curfew. The Ministry of Health also reported 289 deaths in hospitals, compared to 307 the day before.

Prime Minister Jean Castex said last night that the public could start getting vaccinated in the last week of December, if EU authorities approve Pfizer’s vaccine for use next week. A senior European Commission official said the EU would be able to give final approval to the vaccine as early as December 23.

Castex told parliament that the vaccination campaign in France would expand in January and he confirmed that the elderly would be first in line. Health authorities hope to vaccinate about a million residents in nursing homes in January and February, followed by another 15-14 million people from the entire population between March and June.

France, which like many European countries has been battling rising morbidity in recent weeks, has pre-ordered 200 million vaccine doses. Castex said it estimates France will receive 1,160,000 Pfizer vaccine doses by the end of the month, another 677,000 doses on January 5 or 6 and another $ 1.6 million in February.

The New Zealand government announced tonight that it will start vaccinating its citizens for free by the middle of next year. The government has announced that it has promised enough vaccines to vaccinate all 5 million residents of the country, following two new agreements signed with the pharmaceutical companies Astraznica and Novahovas.

“This will be the largest vaccination campaign in New Zealand ever,” Prime Minister Jacinda Arden said at a news conference. New Zealand is among a handful of countries that have managed to curb the spread of the plague within its borders. To date, 1,744 people have been diagnosed and the death toll in the country stands at 25.

Receive a daily newsletter summarizing the day’s news directly to your email. Click to register