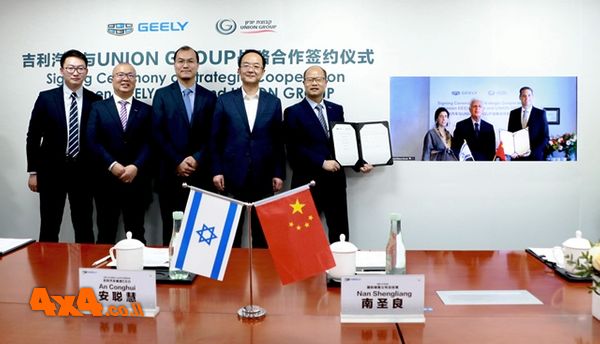 Union Group – an importer of Toyota and other brands to Israel, continues to strengthen its activity in the field of electric vehicles: the group announced the signing of a strategic cooperation agreement with the Chinese car giant GEELY, under which it will import the vehicles of the leading car brand in China.
The import of GEELY and GEOMETRY brands will be done through a new company established by Union – Geo Mobility, Which is expected to begin marketing the vehicles in 2022.

Ran Danai, Union Group CEO of Automotive Operations: “We are very pleased with the collaboration with the Geely Group and are proud that Union has been selected to represent the best-selling Chinese automotive brand. The new agreement strengthens our presence in the field of growing electric vehicles, and will allow us to offer the group’s customers a wide range of excellent and attractive products, depending on the level of demand we expect for the coming years. “

in the picture: Ran DanaiCEO of UnionoGeorge Horesh The owner of Union

The photos are from the signing ceremony held at the same time in Tel Aviv and Hangzhou, China.

Group Geely (Gili) is China’s leading automaker based in Hangzhou, China. The company was founded in 1997 and markets vehicles under the Geely Auto and Geometry brands and also owns 50% of the Lynk & Co. car brand.
The group employs about 50,000 workers and has 12 factories.
Gili owns 5 global R&D centers in Hangzhou (China), Ningbo (China), Gothenburg (Sweden), Coventry (England) and Frankfurt (Germany) and design centers in Shanghai, Gothenburg, Barcelona, ​​California and Coventry. In 2019, they were sold More than 1.5 million vehicles of the group’s brands Geely Auto is the best – selling Chinese brand for three years in a row.

The cooperation agreement was signed last week in a virtual ceremony, in the spirit of the period, held simultaneously in Tel Aviv and Hangzhou, China. The ceremony was attended by Mr. An konjoy President of Geely Holding Group and President and CEO of Geely, Mr. Nan Shangliang, CEO of Geely International, mr Wang Mu, VP Geely International And Mr. Shu Tao, Assistant CEO. Israel was present Mr. George Horesh, Founder and Chairman of the Union Group, Mr. Ran Danai, CEO of Union Car Group, Mrs. Roxanne is plowing, CEO of Union Tech-Ventures, mr Eyal Golan, CEO of Union Investments, mr Yossi Levy, The group’s CFO, along with other team members from both sides.

The names of the participants from the Geely group: