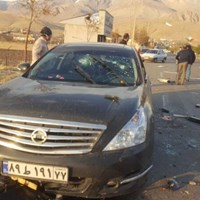 For the first time since the assassination of nuclear scientist Muhsin Fahrizadeh, the president of Iran stands up and unequivocally blames Israel and promises to avenge his death at the time and place he chooses

Iranian President Hassan Rouhani has for the first time officially claimed that Israel is behind the assassination of nuclear scientist Mohsen Fahrizadeh, adding that Israel and the United States are in an effort to start a war in recent days for President Donald Trump’s administration.

Rouhani’s remarks were made at a press conference held yesterday (Monday), in which he accused Israel for the first time of being behind the assassination of Muhsin Fahrizadeh at the end of last month. Alongside being long suspected of assassinating Iranian nuclear scientists over the past decade, Iran has repeatedly refused to comment on the assassination.

Rouhani vowed revenge, but said his country would not allow Israel to decide on the “time or place” of any retaliatory action. He said Iran would not allow instability in the region.

The Iranian president referred to the nuclear deal between Iran and the world powers in 2015, from which President Donald Trump emerged in 2018 and said: “We believe the situation will change under the new US administration.” President-elect Joe Biden has said the United States may return to the nuclear deal.

At a news conference, Rouhani said Iran denies halting its missile program or changing its regional policy, and instead demands a change in U.S. policy, including the abolition of sanctions and compensation for the economic damage it has suffered since the U.S. withdrawal from the 2018 nuclear deal.

“The Americans have been trying for months to add the issue of missiles (to the nuclear talks) and it has been rejected, and Mr Biden knows this very well,” Rouhani said at a news conference broadcast on Iranian television.

Tensions between Washington and Tehran have risen since 2018, when President Trump withdrew from the nuclear deal, reinstating harsh economic sanctions to pressure Tehran to negotiate its nuclear program, develop ballistic missiles and support regional proxy forces, forces in countries where Iran has an interest.