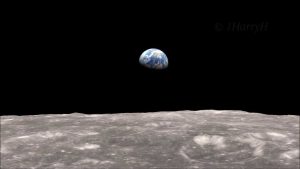 December 24, 1968 – from the Apollo 8 crew. Isn’t it beautiful? It’s not the real rise of the earth, of course. As can be seen from one place on a side near the moon, the Earth does not rise or set, but just hangs in one place in the lunar sky. The astronauts saw the Earth rise as they moved, in a spaceship, above the surface of the moon.

On Christmas Eve in 1968, William Anders, aboard the Apollo 8 spacecraft, turned his camera towards Earth and took this now legendary photograph. It was a picture that showed people a new perspective, with the moon in the foreground and the Earth floating in a distant place. The iconic image helped to stimulate the movement of the environment.

NASA Scientific Image Studio released the video below on the 45th anniversary of the now-known image “Earthrise. ”The Apollo 8 setting and what the astronauts saw through the spacecraft’s windows have been recreated and matched by audio from the flight.

You will hear the voices of Apollo 8 astronauts: Commander Frank Borman and crew members William A. Anders and James A. Lovell. On the fourth orbit of the moon at astronauts, Borman made a roll motion of their craft, which they applied to capture the Earth climbing over the lunar horizon. The video captures the exciting moments as they are stunned by the scene for the first time and embark on a quest to get a color film to capture the important image, while they joke that the image was not part of their schedule.

Dan Rather described the statue image in his book, What unites us. He describes how he captures the peaceful Earth in the dark of space and what was really happening on the planet at that time in history:

This image, which was so peaceful and dramatic, was erected at the end of a turbulent year. It was Christmas Eve 1968, but from there you would never know that there was a hot war in Vietnam or that Cold War was dividing Europe. You would not know about the assassination of Dr. Martin Luther King Jr. or Bobby Kennedy. From that distance, people are invisible, so are cities, countries and national borders. Everything that separates us racial, cultural, political and spiritual is absent from the image. What we see is one fragile planet making its way across the vast expanse of space.

With a click of shutters, our spaceship and everyone on board were captured by the first humans to move beyond the confines of gravity and give us a better picture of our home.

Bottom line: Earthrise is a landmark photograph taken by astronaut William Anders of the fourth orbit of the moon aboard Apollo 8 on December 24, 1968.