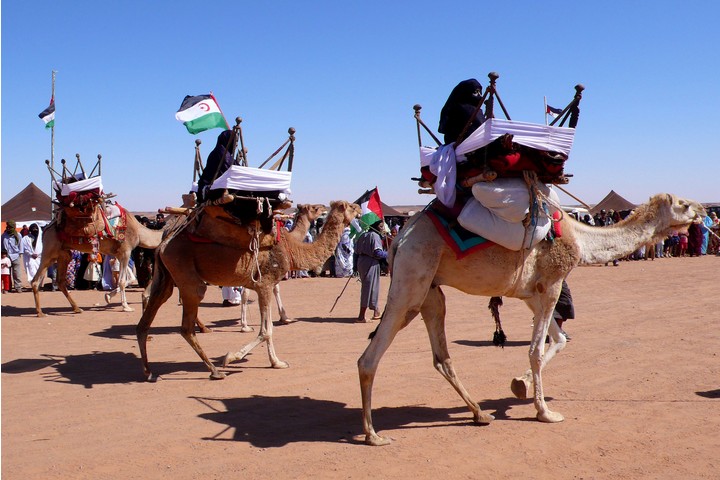 The US President announced on Twitter last Thursday (December 10) that he had signed a declaration recognizing the sovereignty of the Kingdom of Morocco over Western Sahara. According to the outgoing president, Morocco will be obliged to normalize its relations with Israel, as several other Arab countries have done recently.

The outgoing US president has also decided to open a consulate in Dahla to encourage American investors to participate in the development of Western Sahara.

This political decision was made a month after rising tensions in the region following clashes between the Polisario Front (fighting for the independence of Western Sahara) and the Moroccan army in the buffer zone in Gwagrat, in the far southwest of Western Sahara, an area under Moroccan occupation since 1975.

These events have led the “Union for Peace and Security of the African Union” to put Western Sahara’s agenda on the agenda this week.

At the same time, Morocco has given Donald Trump what appears to be a return, namely the normalization of its relations with Israel: official recognition, direct flights between Morocco and Israel, economic and technological cooperation.

The question of the status of Western Sahara, which pending a final settlement is still defined by the UN as “non-autonomous territory” or as “territory without self-government”, has remained unresolved for decades in anticipation of a UN-sponsored referendum that won the agreement Peace in 1991.

Polisario calls for a UN-led referendum on self-determination, while Morocco, which occupies more than two-thirds of the vast desert territory, proposes an autonomy plan under its sovereignty. The peace plan is currently at a dead end.

As the UN acknowledged, Western Sahara is an area still awaiting its decolonization process and is not part of Morocco. In this context, the European Court of Justice has been quoted several times in its decisions that “Morocco and Western Sahara are two separate and distinct states.”

The UN, for its part, has declared that its position on Western Sahara “has not changed”. The organization has been calling for years, without much success, for a political settlement. It should be noted that talks have stalled since spring 2019, after repeated attempts by the UN special envoy Both sides to the dispute reached an agreement on a compromise and an agreed solution.

Asked about Trump’s decision on the sidelines of the climate summit, the UN secretary general said the solution to the Western Sahara question should be found “based on Security Council resolutions.” The UN’s support for the Sahrawi issue was further strengthened on Friday, after the UN General Assembly adopted, without a vote, a resolution in support of a solution that would guarantee the people of Western Sahara the right to self-determination.

At the same time, responses continued to be heard around the world condemning the normalization of Moroccan-Israeli relations through Trump’s recognition of Morocco’s alleged sovereignty over Western Sahara.

According to Muhammad Sidati, the representative of the Polisario Front in France, Trump’s position on Western Sahara is “a precedent in US government policy toward the Sahrawi question” and a “blatant violation of the Sahrawi people’s right to self-determination.”

The special envoy of the “UN Delegation to Western Sahara” (Minorso), Francesco Bastali, called for the decision of the outgoing president to be postponed. He also invited Joe Biden’s new administration to “reverse the decision in accordance with international law.”

The left-wing front in the European Parliament expressed an “unequivocal” rejection of Trump’s decision to recognize Moroccan sovereignty over Western Sahara as a means of blackmailing Israel with normalization, and defined it as a provocative move of blatant violation of international law.

Maybe you will love more

Christopher Ross, a former US ambassador and envoy to the Western Sahara, wrote on his Facebook page: “This stupid and reckless decision contradicts the American commitment to the principles of non-seizure of force by force and the right of peoples to self-determination, both sanctified by the UN Charter. These principles apply to Israel and other countries, but it is no excuse to ignore them in the Western Sahara. “

In fact, the agreement between Israel and Morocco does not surprise anyone. The two countries have been in close but secretive cooperation for 60 years. Israel has always rendered tremendous services to the Kingdom of Morocco, and Morocco has always been there when Israel asked for it.

This agreement is a result of Trump’s mission to his son-in-law Gerard Kushner in 2017 to reach a “final agreement,” which was later defined as the “deal of the century,” between Israel and the Arab world. Peace did not come, but this diplomatic move spawned a series of agreements that shaped new changes in the Middle East and drew a new map not only in the Middle East but also in North Africa.

Muhammad Brahim is an activist from Western Sahara

And one more little thing …

We’re really glad you read this post, and hope you found it interesting. The team of Local Conversation is making significant efforts to bring to our readers a variety of news, research, commentary and opinion columns, all out of a commitment to oppose occupation and promote peace, equality and social justice.

It’s hard to find things like this post in other media in the country, and the reason it’s here is that our press in a local conversation is independent and free. We are not dependent on any capitalist, advertisers or payment walls.

And yet, the much work invested in each such post – from paying writers, through the work of editors and photographers to paying for legal advice or to the servers on which the site sits – costs money. The best way to ensure our stability and independence is to support the community of readers through local call memberships. And in that you have an important place.

It’s time to be friends in a local call