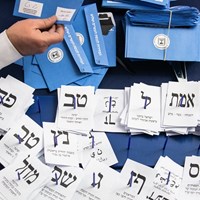 In four days, Israel will march to the polls According to a poll conducted by the Direct Plus Institute which accurately predicted the results of the last election, Prime Minister Netanyahu is here to stay, the Likud party he heads wins 32 seats and the entire bloc reaches the majority needed to form a government | The ultra-Orthodox bloc remains stable

The Direct Falls Institute, which accurately predicted the results of the last election, presents the latest election survey ahead of the elections that will take place in four days, according to which there is a reversal in the results as the Likud strengthens compared to the crashing left parties. Netanyahu has 61 seats to form a government.

According to the poll, if the elections to the 24th Knesset had been held today, the Likud party led by Benjamin Netanyahu would receive no less than 32 seats, while there is a future for Lapid falling to 17 seats.

The third place is surprisingly occupied by Israel Beiteinu of Lieberman, which appears to be the election surprise and receives no less than 9 seats. Bennett’s right with only 8.

The ultra-Orthodox bloc remains in place, with Shas led by Aryeh Deri receiving 9 seats as in the last election, and Torah Judaism with 7 seats.

Saar’s new hope drops to 7 seats. Blue and white returns in a big way with no less than 7 seats. The common-7 list is also. Religious Zionism with 5. Labor, Meretz and Ra’am with 4 each. Zelicha’s economic does not exceed the blocking percentage.

The latest sample for the 2021 elections was conducted by Shlomo Pilber and Tzuriel Sharon through Direct Polls LTD, from March 17 to 18, 2021, using a digital system combined with a panel, among 6,436 adult respondents (18+) from the entire population in Israel, including Arabic, Russian and society speakers. The ultra-Orthodox. Statistical sampling error + 1.2% + with a probability of 95%.