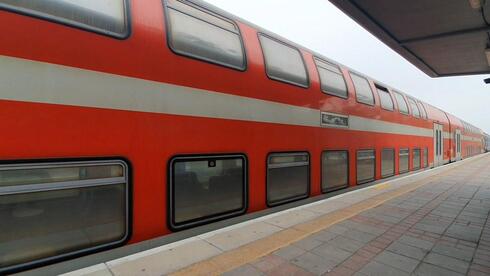 In recent years, quite a few railroads have been laid to cities in the north and south of the country, but many of the stations are located outside the cities, and access to them via public transportation is partial. The meaning – those who can travel in a private car and those who depend on public transportation have to make do with a partial and unattractive service that keeps them away from employment and interest centers. Fifth article in the “Disconnected” series – public transportation problems in the periphery.

The most famous example of the disconnection between the train station and the city is the line in Dimona. The station, which was established in 2005, is located far outside the city, and only three trains leave for Be’er Sheva every day. In 3 different reports, the State Comptroller referred to the failure of the train in the southern city, and found that in 2017, an average of 7 passengers traveled on the line per day.

There are quite a few reasons for the failure of the train in Dimona – low service frequency, the track that does not connect to the train network and the center of Beer Sheva, the difficulties of accessibility of the area’s residents to the station and more. But the distance of the station from the city center has a significant place. Some argue that the answer given to the need for public transportation through bus traffic is more efficient, and that the train line is operated for political reasons. ”

“The station in Dimona is located outside the city, on the edge of an old and undeveloped industrial area, in an area that even the physical access to is not pleasant. As part of the train line to Eilat, the station will be relocated to the city, but the new location is not optimal,” explained Tomer Guthalff.

Even with the neighbor Yeruham, the train station is not used by most of the city’s residents. “This journey simply became impossible, while the journey by car is 25 minutes,” said Kinneret Suissa, a resident of Yeruham who works in Be’er Sheva. “I decided to drop things I had in the plans so we could buy a car.”

“We do not use the station in Dimona at all,” concluded social activist Hani Briga. “It is not convenient to reach it and we hope that the Baha’i city and the bases will also bring public transportation here.”

And this is indeed the main hope of the residents of the Negev. As part of the IDF bases’ move south, the Ministry of Transportation promised to pave a light rail or electric bus system from Be’er Sheva to Kiryat HaModi’in, which will open in 2027. But the project has not yet been budgeted. In any case, it appears in the strategic plan for 2040.

“Railway stations in Israel were built after the cities were built, in a relatively late period compared to stations in the United States and Europe. That’s where they actually brought a train station and the city was created around it, “Gotholf explained.

As a positive example, for a city whose train is in the heart of its urban center, Gotholf brings Beer Sheva. But in the rest of the country there are quite a few difficult cases. “In Ofakim, the station is located in the fields and we are trying to plan the city so that it will be closer to the train station, and it will take 10-20 years to develop.”

“There are also intermediate cases like Netivot, which was planned outside the city but today the city has developed into a train station and new neighborhoods have been located that are in high demand,” he added. “Also on Sderot, the train station is located at the entrance to the city and in a place that is not within walking distance of the vast majority of the city’s residents.”

According to him, the test for a good location of a train station is one that most people can reach on foot, by bicycle or by a very short ride on public transport.

In Kiryat Gat, the station is relatively well located, but some of the city’s new neighborhoods are planned away from the train station and the city center. In Kiryat Malachi the problem is even more serious – the station does serve the seats of the Yoav Regional Council but does not adequately serve the remote Kiryat Malachi. Similar problems exist in the north – in Yokneam, Beit She’an and the Ahihud station, which is defined as a regional station.

“Regional train stations in Hebrew translation are car stations,” said Dr. Yoav Lerman, an urban planning expert at Planet. “They are often adjacent to large parking lots and interchanges and are not close to urban construction that gives the main traffic to train stations around the world. In Kiryat Malachi, for example, there is no salvation. “

If this is an inefficient move – why continue to build stations far from the city? “In the country’s view, when it comes to setting up a station they are logically trying to do it the cheapest – on an existing line without sliding, and where the process will get the least objections. If you build a train station near people – some file objections, if you drive four miles – You are not seen, and the process is smooth in terms of planning, cheaper and allows for the construction of a larger parking lot. “

“In the end the use is harmed, but there is a station, there is a movie, there is a mayor and a minister, and everyone is fine. The stations all over the country are not close to the city, and in the periphery it is long distances so you can not get to the train station.”

The bus lines also fail to make train stations optimally accessible. “There is not much use of stations so the line is not frequent, there are no users, and it is a loop. The maximum you can do is coordination, so the line will reach the station before the train and leave after, but it will not be a frequent line you leave the house spontaneously to the station.”

Meanwhile, the planning institutions are trying to reduce the consequences of the mistakes made in the locations of the train stations, and bring the city to the station, instead of placing the station in advance in the city center.

In a large proportion of cases the planning approach is to stick to the route of the historic railway tracks laid during the British Mandate and the Ottoman Empire in order to save costs. But the purpose of the train then was to transport goods and serve the military needs, while today the purpose of the train is to transport people. Meaning – its route and the location of the stations did not always remain relevant.

Israel also does not use practices carried out in cities of the Western world such as sections of the subway or subway into the city center. At the Be’er Sheva North train station, for example, a technical center for trains was established, and thus the urban development near the station got stuck. “Imagine that instead of the Azrieli Towers in Tel Aviv above the station, a train garage would be set up,” Guthalff explained of the problem.

A study conducted by the organization “Transport Today and Tomorrow” examined the ratio of passengers at the station to the buses that can serve them, and found significant differences between the metropolitan areas and the peripheral localities. In Tel Aviv, Jerusalem, Beer Sheva and Haifa, the train stations are close to the public transportation terminals, so the service is relatively good.

In contrast, many peripheral cities have no consistency. In Ofakim, for example, there is a frequent bus service except during rush hour in the morning, and in Migdal Haemek the phenomenon is similar but occurs in the afternoon. In Kiryat Gat and Nahariya, there is not enough service during rush hours, while in Yokneam the service is relatively good. In Ashdod, Ashkelon, Kiryat Motzkin and Lehavim station there are a large number of passengers compared to buses – and the service is not satisfactory.

Even at stations where there is public transport coverage, its travel is often slow and cumbersome, given its long distance from the city center, a fact that will make those who can choose to travel by private car.

“In the past, local authorities did not want the stations in their area because a train station was perceived as ‘interfering’, and the Ministry of Transportation did not insist enough,” said the organization’s CEO Tamar Keinan. “In new stations just like Afula and Beit She’an, they did not even make an effort to bring the station closer To the city so that people can get there relatively easily on foot or by bicycle. “Even in the location of the bus stops in relation to the location of the parking lots, there is often a significant priority for the private car.”

One way to solve the problem of train stations far from city centers is to promote construction around the stations and bring the city to the station. Another solution is to bring the stations closer to the city centers. “When is there good public transportation? When there are a lot of activities, a lot of housing and a lot of things that are not residential, but in mass, and a lot,” Dr. Lerman said.

“For the vehicles to travel almost full and take a lot of passengers, even during off-peak hours, you need concentration, density and pace, while in the periphery everything is spacious,” he added. “In places like this on the periphery of Germany and France, there is a train that uses heavy rail tracks, but enters the city on light rail. In Israel, this combined means of transportation can be operated. There is a railway between Ashkelon and Beersheba without many trains, and there is time that this track is not used. “It was possible to put a train that enters on light rail tracks into Netivot and Sderot, and thus the connection of the cities would be improved and the level of service would increase much.”

Another option is to use the systems of buses that travel on designated routes such as the Matron in Haifa. “These are systems that are much more suitable in peripheral areas because they have no train costs, will not have train occupancy and can be operated more frequently. Cambridge has a direct bus line between towns that travels 100 km / h and no traffic lights, because it has a route that a car does not Can get on it, and it’s all about asphalt. “

And there is also a short-term solution. “The main thing required to perform is significant service additions at stations where service is lacking,” Keenan concluded. “These service additions should improve the frequency of travel as well as increase the operating hours of the buses to the stations.”

MDepartment of Transportation In response: “These are claims that are inconsistent with the transportation planning of the rail network accepted in many countries around the world. Train stations are located in areas that take into account the future development of cities in the coming years, as happened in many cities in the country. Are not intended to serve only one locality, but all the surrounding localities and therefore it is not always right to move a railway within the cities themselves.

“It will be emphasized that there is regular public transportation to all train stations in the country and feeder lines that are synchronized with the train schedules. The Ministry of Transportation is constantly working to upgrade and improve the public transportation system, optimally adapting to the changing needs of the population.”