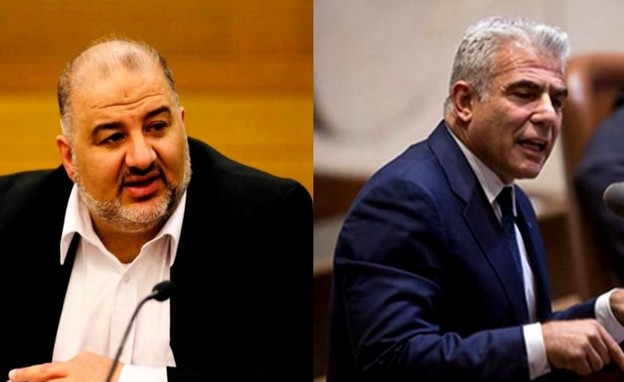 Ra’am Chairman, MK Dr. Mansour Abbas, met today (Sunday) with Chairman Yesh Atid, MK Yair Lapid, at the latter’s home. At the end of the meeting, a laconic announcement was issued according to which the two “held a discussion on the possibilities of forming a new government and announced that the dialogue between them will continue in the coming days.” Abbas declared the meeting in an interview with Radio Nas this morning, saying that “contacts are continuing.” He said there were no direct contacts with the joint list.

The lack of a decision between the blocs places Abbas in a key position, as he is able to advance the two political camps towards a government train. The meeting between Abbas and Lapid comes after Abbas met with Ayoub Kara, number 41 on the Likud list, who called on him to support the formation of a government headed by Netanyahu.

In the documentation of the meeting between the two that was broadcast in the holiday edition, some praised Abbas: “He did not come because of the Likud, or because of the joint or anyone else.” He added: “I think Dr. Mansour Abbas is a blessing to this whole society.” He further whispered in Abbas’ ear and said: “When Netanyahu addressed Arab society, we did not ask him questions – he brought Mansour and we are satisfied.” This morning he called Radio Nas: “I belong to the Arab society and I have good relations with my friends Mansour Abbas and with the Knesset members from the joint who made a celebration in my honor when I returned to the Knesset.”

In the bloc of change, on the other hand, they are determined to harness the RAM for outside support in a minority government. The joint list and RAAM will be supported from the outside according to this vision, and it is possible that the meeting of the two will deal with this proposal.