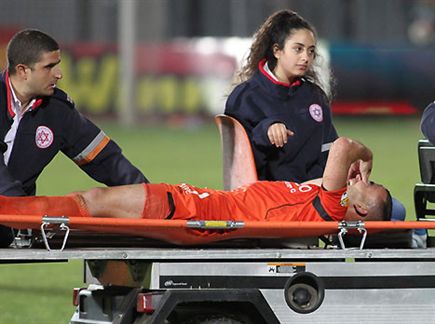 The Rafi Dahan affair has come to an end. Since 2015, there have been court hearings surrounding one of the ugliest injuries known to Israeli football, with Ruben Raios slipping wildly at the feet of Dahan, who was forced to announce his early retirement from football following that injury.

Throughout the hearings the court has dealt with the question of whether it is legitimate to claim damages in a civil lawsuit due to football injuries and now, the Supreme Court has reached a decision, probably last in the matter, when it chose to dismiss the parties’ appeals. Meaning – Dahan will be compensated with NIS 4.2 million.

As you may recall, in December 2019, the Tel Aviv District Court ruled in a precedent-setting decision that Maccabi Haifa, Raios and the insurance company must compensate Dahan NIS 4.2 million. The Green Club decided to stand on their own two feet and appeal the ruling, From the club or the Spanish midfielder and will be paid in full by the insurance company.The Greens claim a verdict in a civil lawsuit of this kind will flood the courts in thousands of similar cases and cause players to become cautious and scared on the lawn.

On the other hand, due to the Greens’ appeal, Dahan also decided, through attorney Yossi Geyer and in collaboration with the National Insurance Institute, to appeal the ruling given in the district and in addition to the NIS 4.2 million awarded to him, to demand a significant increase in compensation by another NIS 1 million.

Following the hearing held yesterday (Monday) in the Supreme Court by a panel of three judges – Noam Solberg, Yosef Elron and Yael Wilner – the final decision was announced today, according to which the two appeals, of Dahan and of the Greens alike, are rejected. The Supreme Court sought to honor the judgment given in the district by Judge Orna Levy and thus it appears that the affair is over.

As you may recall, Dahan, who found himself at home for many days, filed a lawsuit against those involved for him: the Spanish midfielder, Maccabi Haifa and its insurance company. The defensive line was a warning against a dangerous precedent – a civil lawsuit as a result of a sports injury during a game.

The details of the compensation demanded by Dahan amounted to NIS 14 million, including the calculation of the wage loss from the moment of the injury (NIS 5 and a half million), the loss of earnings for the sophisticated future up to the age of 38 (NIS 3 and a half million), pension losses (NIS 1.5 million) and pain compensation. And suffering (half a million shekels). The National Insurance Institute added to the claim a claim for compensation in the amount of an additional NIS 7 million for past and future pensions.

A representative of Maccabi Haifa and Kesher Sports Ltd., Adv. Gil Atar, stated: “We respect the court’s position, in light of the special circumstances of the case.”