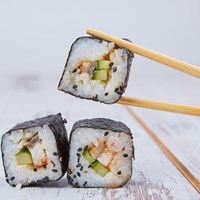 Taiwanese officials have been urging citizens to stop changing their name to “salmon” in order to get free sushi.

About 150 people have applied to change their name legally in the last two days due to a promotion in the popular sushi chain “Sushiro”.

As part of the agreement between the customers and the restaurant, anyone who presents an ID card containing the Chinese characters ‘Goy Yu’ – meaning ‘salmon’ – receives free sushi.

A university student with the last name ‘Ma’ told local news that he changed his name on Thursday morning, and had already eaten sushi worth $ 300. But officials in Taiwan failed to see the funny side of the promotion and accused people of wasting time on the fake requests. This was reported by the British “Daily Mail”.

“This kind of name change not only wastes time but causes unnecessary paperwork,” said Deputy Interior Minister Chen Tsung-yin. He asked citizens to “cherish their managerial resources, and be more rational on the issue in the future.”

“I changed my first name to Salmon and two of my friends did the same,” said a woman named Tong. “We’ll just change our names back then.” Other names on the subject of salmon reported in the local media included ‘Prince of Salmon’, ‘Meteor King of Salmon’ and ‘Baked Salmon’.