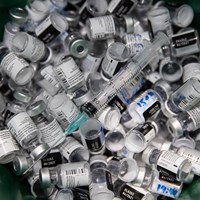 UK with a new vaccine record in one day. 874,000 gave in just one day. As a result, the EU threatens to unilaterally block exports of vaccines to Corona produced in EU countries to other countries, such as the UK and the US

The British data is staggering, the second day in a row of record data, after 711,156 vaccines were given on Friday, 874,000 were given last Saturday.

The Daily Mail reports that more than half of all UK adults have received at least one vaccine, but as Britain’s most successful vaccine campaign intensifies, the EU is threatening to block vaccine exports to the UK.

European Commissioner for Financial Services Meird McGuinness said that “everything is on the table” and the focus of the EU is on “protecting our citizens”. She also said there was a need for both sides to ‘relax’ amid the escalating word wars over the supply of vaccines, the UK government has warned Brussels the EU capital that ‘the world is watching’.

EU threatens to unilaterally block exports of corona vaccines produced in EU countries to other countries, such as UK and US, they are under hysterical pressure because they have been found to be helpless when it comes to organizing the purchase of vaccines, EU conduct is a scandal, everyone Blaming everyone, a few days ago Austrian Chancellor Sebastian Kurz said that “some countries have received the vaccines unfairly” which the EU has denied.

France and Italy and Germany are in a terrible situation for them, they have imposed closures that provoked a lot of anger in the countries, while Israel UK and US are in a relatively good situation, Europe is in an almost catastrophic situation, a faltering economy, almost no vaccines, and they blame everyone but themselves. While Israel and the United States and Britain became worlds bringing vaccines, Europe was engaged in quarrels within the bloc.

British Defense Secretary Ben Wallace has warned Brussels that a continued ban on exports would damage EU reputation around the world. He said the EU was “under enormous political pressure” because of the launch of the vaccines imposed on it, and insisted that “the rest of the world is looking at the commission for its conduct”.

Of the 874,000 vaccines given on Saturday in the UK, 756,873 were in England alone, and 686,424 of these vaccines were a first dose. Meanwhile the data is encouraging, 35 people died in hospitals in England in just one day, according to data from the NHS Health Organization in England. Compared to other days when hundreds of people died, the numbers fill the British with hope.

The UK government has begun work on plans to move most of Corona’s vaccine production to the UK to make the UK more independent, the Telegraph reported.