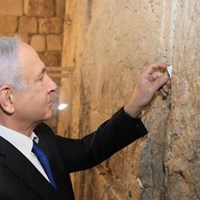 A few hours before Election Day, Benjamin and Sarah Netanyahu arrived at the Western Wall together and offered a silent prayer for success and good health. The full notes are in front of you

Prime Minister Benjamin Netanyahu and his wife, Sarah Netanyahu, arrived this evening (Monday) on the eve of the election at the Western Wall plaza to offer a prayer, a few hours before the polls opened, in a prayer for victory.

The Western Wall plaza was closed, and the Prime Minister entered the plaza with his wife and offered a prayer for long minutes. At the end of the prayer, the two buried a note, as is customary between the Western Wall stones.

A spokeswoman for the Prime Minister’s Office released the note laid by the two, the prime minister wrote: “Thank you to the Creator of the world that we left the corona in peace, thank you for the recovery of my beloved wife Sarah.”

On the fateful election campaign tomorrow, the prime minister wrote: “Praying for victory in the elections for the State of Israel and for the economy of Israel, pledge to act for all the people of Israel.”

The Prime Minister’s wife, Sarah Netanyahu, wrote: “In prayer for the great victory of my husband, Prime Minister Benjamin Netanyahu. That it is a victory for the State of Israel, the Land of Israel and the Jewish people.

“For my family, my husband, and three children Yair Yair and Avner and for a speedy and complete recovery from the surgery and back to life, with the help of the name, health medicine and great success,” Sarah added at the end, “and a big thank you to the Creator for recovering from the surgery.”