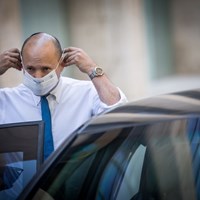 Right-wing chairman MK Bennett issued a warning this morning and warned the government that if no drastic measures were taken which he rewarded in his plan to eradicate the disease, many more Israelis would be killed | According to him: as early as next Sunday, he will enter the civilian Corona cabinet that he established

MK Naftali Bennett, who appropriated the treatment of Corona, warned the government today (Thursday) that if parts of his plan, which he presented to the government, were not adopted, hundreds more in Israel will die in vain.

Bennett announced that he was convening an emergency discussion of the Corona Civil Cabinet on Sunday, a cabinet he set up alongside experts in medicine and economics, when earlier he presented some data from the plan he presented to the government six months ago, and now claims it must be activated.

This is what Bennett calls for, to perform checks on all passengers entering Israel before the flight and after landing. In addition, operating a national traffic light in full enforcement without political considerations, national corona tests using the consolidation method, operating the education system based on initiated tests for teachers and students, preparing for the absorption of serious patients and returning quality tests to nursing homes.

As reported this morning, the jump in morbidity continues and data from the Ministry of Health show that more than 2,800 more patients were diagnosed in the last day in Israel.

Meanwhile, the Ministry of Defense said last night that “Defense Minister Bnei Gantz addressed the Prime Minister with a demand to convene the Corona Cabinet urgently in light of the increase in morbidity and against the background of the start of the vaccination campaign. Leaping. “

Ganz said yesterday, “If restrictions are required – business owners should be notified in advance.”