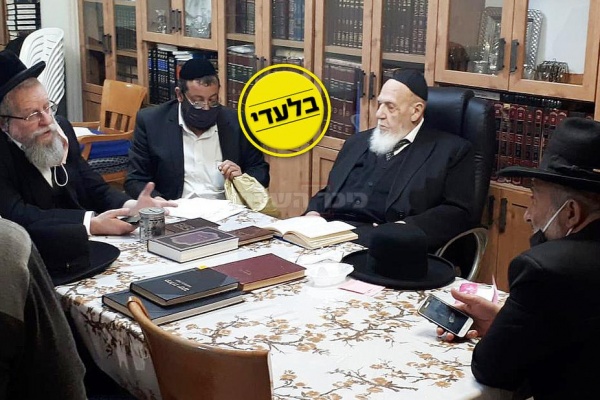 The dramatic announcement by the medical advisor, Rabbi Elimelech Firer, when he presented the position of the greats of Israel, according to which – “everyone who can be vaccinated – is right to do so”, while clarifying that there is no risk in vaccines, caused a huge echo.

Kikar Hashabat has learned that after asking the residence of the Rosh Yeshiva Council President, the genius Hacham Shalom Cohen, received many phone calls, day in and day out, from Israel and around the world, regarding the use of vaccines, he went into depth before making his decision.

References to the rabbi’s home, Shabbat Square learned, came from all over the country and from around the world, for example from Mexico, where the plague is raging terribly, and the rabbi has hundreds and thousands of students and alumni, many communities devoid of him, from Brazil, Argentina, New York, France And many other places, who sought to find out whether the rabbi’s position was to get vaccinated or not.

The rabbi’s instruction on the subject, it turned out, was fateful and significant to many, and the rabbi sought to examine things in depth before making a decision.

Firer at the residence of the President of the Council; Right: Minister Deri

Following this, Rabbi Elimelech Firer was called to the rabbi’s house. Firer arrived and the chairman of the Shas movement, Minister Aryeh Deri, was also present.

During the meeting, the President of the Council questioned, asked and demanded from all directions and went down to the details of the proposed vaccine – are there any risks and from what, at what ages, all the medical details surrounding the vaccine, with each answer being examined in depth and from several directions.

In the end, the decision was made and the head of the yeshiva ordered Rabbi Firer to read out – in his opinion, as the wording was published last night.

Last night, Rabbi Firer announced on behalf of the president of the council, Gerash Cohen, the minister of the Torah, Gerach Kanievsky, and the head of the yeshiva, Gerach Edelstein, that after demanding and researching the proposed vaccine, he announced their opinion and on their behalf that ” Yes. “Firer noted that” from the experiment that was performed properly and according to all the parameters accepted and customary in the world of medicine, it has been proven that there is no risk in receiving the vaccine. “

Firer also published on behalf of the rabbis that “those who suffer from allergies of all kinds, will consult with the family doctor on how to get the vaccine under medical supervision.” He also adds that “since the experiment was conducted among ages 16 and up, young people up to the above age who want to wait for the experiment of young people their age – they have something to rely on.”