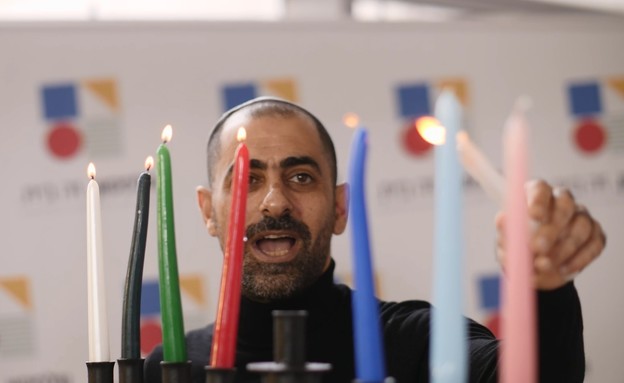 Last night (Wednesday), actor and comedian Asi Israeloff arrived at the Wolfson Medical Center in Holon, where he met the medical staff, including nurses, nurses, nurses, managers, operations staff and medical secretaries, and together they lit a seventh Hanukkah candle. At the menorah, they made sure to light a white candle of thanks, dedicated to the “angels in white” – members of the medical staff, who are doing holy work in their war in Corona.

From the moment Israeloff arrived at the main building of the hospital, it was impossible to erase the smile from the faces of the staff members. Asi, as usual, made everyone laugh, heated up the atmosphere and made many happy for all of Wolfson’s staff, who were briefly relieved of their daily war on public health.

The Edith Wolfson Medical Center was established with the generous assistance of the Wolfson family and named after Lady Edith Wolfson, Sir Isaac’s wife. When it opened in 1980, 342 beds were operated at the center, Proposed to the growing population of the area.The development is reflected in a significant increase in the number of hospital beds and an increase in the number of medical and paramedical staff standards.

Last week, the Wolfson Medical Center announced that the hospital was already preparing for the administration of Corona vaccines to about 3,500 of its staff, and that these would be the first to be vaccinated upon arrival of the first vaccines in the country, among the medical staff.

You too want to salute the angels in white?

In recent days, the leading Israeli artists, at Tara’s initiative, have been lighting candles daily to unite hearts and thank the “angels in white”, the medical staff who work day and night to maintain public health, with one white candle in the menorah dedicated to “the angels in white”.

The candle lighting ceremonies take place throughout the holidays at 19:55, and are broadcast from the various medical centers in Israel simultaneously on television channels, radio stations, news sites, as well as on Tara’s Facebook and Instagram pages. Tara also invites the public to upload pictures from the lighting of their home candles to the ‘Angels in White’ website, with a package of dairy products donated to the medical staff for each picture. The distribution will take place in a variety of hospitals from north to south throughout the days of Hanukkah.