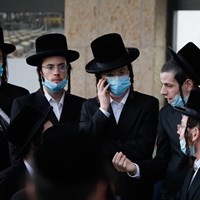 At the same time as preparing for the distribution of vaccines, Israel is facing a large increase in the number of people infected with the coronavirus. • Cabinet member, Minister Aryeh Deri this evening:

The State of Israel is working on two levels, one of which is preparing for the start of the big vaccination campaign, which is expected to begin next Saturday evening when Prime Minister Benjamin Netanyahu and Health Minister Yuli Edelstein are vaccinated, and the next day President Reuven Rivlin will join the vaccinators. , When the numbers about them warned the Ministry of Health that they are the marker that ‘tightened restraint’ should be imposed already here, and by and large.

According to the report tonight in “News 12”, if the Hanukkah miracle does not occur and the morbidity decreases, then Israel will return next week to a series of stricter restrictions, due to the fact that the morbidity situation in Israel is rising and rising in huge steps towards 3,000 patients a day. When the target set by the Ministry of Health is 2500. First, the government will try to avoid a third general blockade in number and will be satisfied with a “tight restraint” that is expected to include the complete closure of street shops, malls and markets. Schools in the red and orange cities will also be closed.

There is an even more dramatic move on the cabinet table, so that if the tightened restraint does not produce its benefit and the morbidity does not decrease significantly within three weeks, then Israel will enter a third full full closure. When the Ministry of Health estimates that in such a case the entire trade will be closed within five days.

Such a move will not pass quietly and obediently this time. The chairman of the Brill Group, Shachar Turgeman, clarified in an interview with the “Savings Plan” in News 12 that “the business and the trade industry will not meet the new restrictions under the definition of tightened restraint.” [בתחלואה] Not related to trade. “It is related to the corona hatchery at Ben Gurion Airport, bringing the virus from Dubai to Israel, to the lack of enforcement on insurgents,” Turgeman said, adding: “Anyone who thinks he will close only trade and everything else will remain open is wrong. “. Threatened.

Meanwhile, Shas chairman Interior Minister Aryeh Deri was interviewed tonight on News 12 and was asked to express his opinion on a variety of issues at stake, ranging from rising morbidity, misconduct at Ben Gurion Airport vaccines and the spike in morbidity among the ultra-Orthodox public who is one of its representatives.

In his opening remarks, Deri said: “Too bad, what a sage who sees the future, I think it was a mistake not to make decisions, so I also did not vote, I thought it was a mistake not to take a few steps already, less restraint, but some limiting steps before Hanukkah, if it A nightly closure, another closure, in order for us to save ourselves a third closure, a third closure does not have to be, there may be a tight restraint for a few weeks, but unfortunately I do not see another way. “

Deri later attacked the conduct at Ben Gurion Airport, claiming that the allegations should not be directed to the Ministry of the Interior entrusted to the Immigration Authority, but to the staff operating the airport, “I was there this morning,” Deri said, adding “they did not navigate my time correctly. The flights and the sleeves. “

Also on the issue of returning from red countries to the country, Deri said that this issue is particularly worrying, when most countries are red, Deri even stated that at the next cabinet meeting it is going to be one of the issues to be discussed, “a difficult decision needs to be made” he added.

A Corona cabinet member was also asked if he would receive the vaccine, “surely” Deri replied, adding “When they tell me to come and get the vaccine, I will come and take, whatever they tell me I will do, I think it is a must especially for anyone over the age of 50 or at risk. Deri added, “I studied the matter in depth. I was with Rabbi Firer with the Torah scholars, in light of the fact that the ultra-Orthodox public is waiting to hear your opinion, the Torah scholars. The three great rabbis gave permission to Rabbi Pierre to issue a letter calling for vaccination.”

The interior minister also referred to the complicated political situation and said: “We are in the 90th minute, I do not see how we can avoid this. It is a pity that instead of fighting the virus, we should go to the polls.”

In conclusion, Deri said, “I estimate that the illness will not go down tomorrow the day after tomorrow. Unfortunately, he had to take steps.”