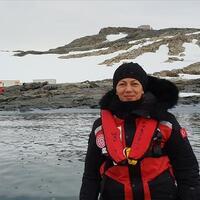 A scientist specializing in Arctic studies said research on Antarctica has shed light on global climate change as well as Earth’s history.

Burcu Özsoy, a member of the Faculty of Marine Science of Istanbul Technical University and chairman of the Arctic Research Institute of the TÜBİTAK Marmara Research Center, has been conducting studies on marine ice on the white continent.

After being in Antarctica six times and having led the four scientific expeditions that Turkey organized on the continent, she was awarded by the Turkish Academy of Sciences for her arctic studies.

Regarding International Women and Girls Day in Science, Özsoy spoke about her studies on the pole.

Emphasizing that the poles are the regions where climate change can be monitored, Özsoy said that more climate-stimulating elements are present on the poles, which makes the studies on these regions important.

She said information related to millions of years ago is hidden in the 4,000-meter-thick ice in Antarctica.

“You can take a sample from 3,000 meters below, and it will take you back 800,000 years in time. There is a memory of the Earth’s past hidden; shapes, geological structures and atmosphere. ”

“Antarctica has the largest hole in the ozone layer. On land with an area of ​​14 million square kilometers, only 1,000 scientists live. The polar regions are precious in terms of climate, economy and science, ”she said.

Özsoy also noted that the number of women in the field of science is less than that of men.

“It is for this reason that we should be given more confidence. I call on our young girls to stop telling themselves ‘I can’t do it, I can’t be a scientist,’ but to do research, develop themselves, ask questions and know sent to scientists, ”she said.

“We need to enlighten the world. I want our youth to be inspired and our young girls to question and contact us, the scientists. If they have career models, I have no doubt they will be in a better position than we are. “