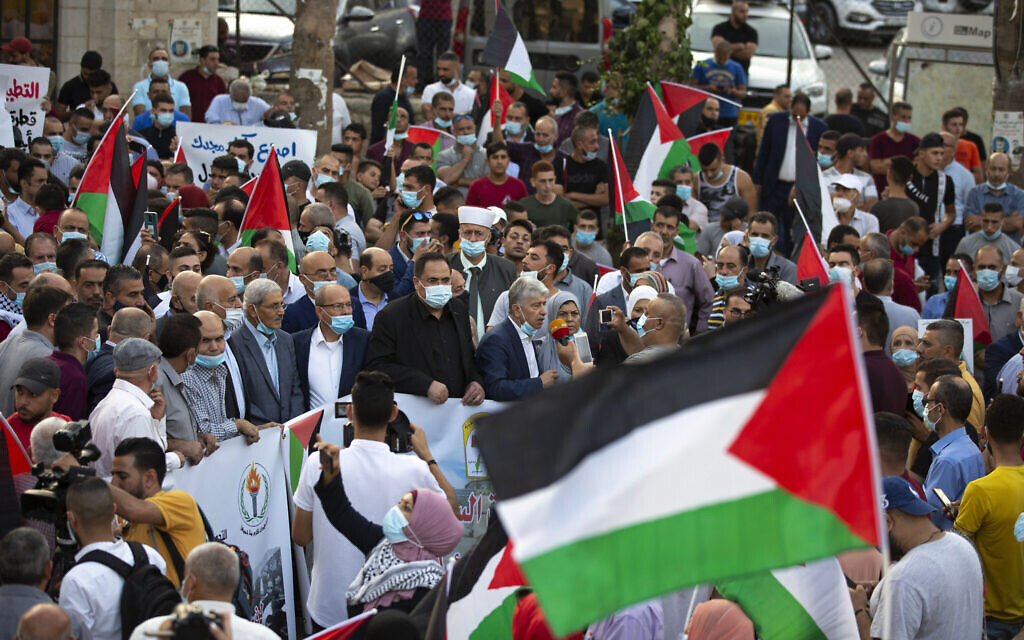 Two key advisers to Palestinian Authority President Mahmoud Abbas have called for talks with Israel in an editorial that Palestinians will abandon their campaign for an independent state and instead aim for “soft” sovereignty. Jordan and Egypt take over responsibility for border security issues.

Writing in the latest issue of the journal Foreign Affairs, Hussein Agha and Ahmad Samih Khalidi said that the normalization treaties between Arab states and Israel call on Palestinians to reconsider their approach to achieving peace and statehood.

“The prospects for‘ hard ’sovereignty, based on the nineteenth-century views of the nationalist state, with full control and control of land, borders, and resources, are remote,” he wrote.

Palestinians may have to choose between the “self-defeating chimera of hard-core domination” or “adopting softer versions,” they said.

They argued that the pan-Arab conflict with Israel was coming to an end with the recently signed agreements between some countries and the Jewish state. Meanwhile, the Palestinians, they warned, are leaving.

“It is clear that the Palestinians need a new approach – one based on a revised strategic vision and a reformed aspiration,” Agha and Khalidi wrote. “It needs to redefine the idea of ​​Palestinian sovereignty, rethink Palestinian views on security, and stop shifting responsibility or embracing unbelievable threats.”

Jordan, through its history and geographical location, is closely linked to the West Bank, and Egypt is, in the same way, connected to the Gaza Strip, they wrote.

“Egyptian and Jordanian new positions can be an effective development at a time when the Palestinians alone have not been able to protect their land from growing further away from Israel,” he said, urging those two countries to be directly involved in any future peace talks between Israel and the Palestinians.

The two residents of London, Agha and Khalidi, have long been involved in talks between Israel and the Palestinians.

In their op-ed foreign affairs they recently called for Israel’s normalization agreements with the United Arab Emirates, Bahrain, Sudan and Morocco and wrote that Saudi Arabia has also “taken unprecedented steps in that direction. “

Oman can also be normalized, while other Arab governments “maintain important, albeit hidden, ties with Israel.”

“Further moves towards normalization seem to be only a matter of time,” they said, accusing Arab governments that have already stepped out of self-interest.

Normalization has weakened what was once a common Arab occupation, laid down in the 2002 Arab-based Peace Campaign for peace, that ties with Israel would only be established after full withdrawal back to lines before 1967. Israel, they said, has now received little incentive for peace with the Palestinians.

“With effective Arab strategic depth – that is, Arab states’ willingness to support the Palestinian cause – the Palestinians must now think hard about how they can reorganize their struggle, how to deal with it what has been brought to this point, and how you can change, ”they said.

“In short, Palestinian diplomacy has failed miserably,” he wrote. “It will take exceptional talent to turn an almost complete consensus among Arabs and Muslims over the future of Palestine and Jerusalem into another issue on a full Arab agenda.”

But despite their suspicions of normalization between Israel and Arab countries, the two argued that future treaties could provide opportunities for Palestinians, including establishing Saudi relations with Israel “when Israel ended its de facto ties with the West Bank through its settlement expansions.”

That view surpassed the one offered Monday in a daily op-ed in Palestine Al-Quds daily by a former Saudi adviser who stressed that the kingdom would only make ties with Israel after the establishment of the Palestinian state completely independent.

But they also retained criticism for the PA, which “has largely offered a seductive model of good government, a better life, or more freedom. “

However, they suggested Abbas how they greatly reduced the perception of “armed conflict” among Palestinian society in general.

Peace talks between Israel and the Palestinians have been frozen since 2014.